The Young and the Restless Spoilers: Christian Reveal Puts Nick and Sharon At Odds – Will Lightening Strike Twice?

BY Sean O'Brien on August 11, 2016 | Comments: one comment
Related : Soap Opera, Spoiler, Television, The Young and the Restless 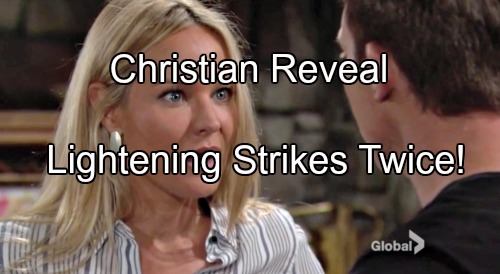 The Young and the Restless (Y&R) spoilers tease that Nick (Joshua Morrow) will face a double shock when he learns that Christian is alive, but isn’t his son. Sharon (Sharon Case) continues to guard the door that is keeping this secret hidden. But she, like other characters in Genoa City, doesn’t know that there’s a secondary shocker linked to the boy who everyone calls Sully.

‘Shick’ ruled Y&R for years, then Cassie’s (Camryn Grimes) untimely death was used to separate Sharon and Nick. Phyllis (then played by Michelle Stafford) entered the picture and ‘Phick’ was born, along with Summer (later played by Hunter King). So, The Young and the Restless spoilers readers know that Nick will explode when he learns that Sharon has been keeping Sully’s true identity from him, especially after Sage’s (Kelly Sullivan) tragic death.

This former power couple’s trust issues are legendary and this issue will top them all.

Related: Who Does Kevin Belong With – VOTE!

Grimes’ second character, Mariah, learned who Sully really is recently. At first she tried to pressure her mom to tell the truth, but Sharon refused to do so. This mother-daughter pair eventually reached an impasse that resulted in Mariah agreeing to withhold the dramatic information from Dylan (Steve Burton), Nick, and others.

Meanwhile, on the other side of this arc, Adam (Justin Hartley) previously told Chelsea (Melissa Claire Egan) that Christian was his biological child. Like Nick, ‘Chadam’ has no idea that Sage’s baby didn’t die, but was kidnapped and given to Sharon via Dr. Sandy Anderson (Elizabeth Bogush), or that Sharon didn’t initially know that Sully was actually Christian. All angles detailed within this storyline could merge from varying directions and produce unexpected consequences for all involved.

In the end it won’t matter if there is a time lag between when Nick first learns that Christian is alive and that he’s actually Adam’s child. Yes, Nick may come to believe that Sage’s Heavenly spirit played a role in reuniting him with their child. But, that miracle will be fleeting and then a second lightning bolt will arrive.