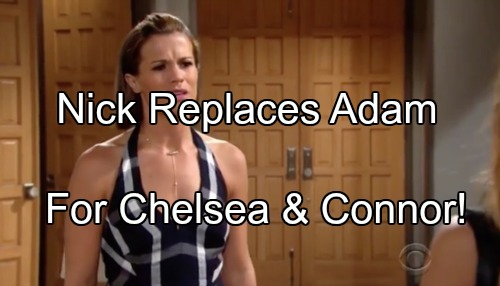 The Young and the Restless (Y&R) spoilers tease that Nick (Joshua Morrow) will soon grow closer to Chelsea (Melissa Claire Egan). Since Victor (Eric Braeden) is pushing Nick aside at Newman Enterprises, he’ll have plenty of time to support Chelsea through the crisis she’s facing. Nick can’t resist helping women in distress.

It looks like Nick will even find himself bonding with Connor (Gunner and Ryder Gadbois). Perhaps Nick will think he needs to step up and be a father figure while Adam (Justin Hartley) is stuck in the state pen. Adam refuses to let Connor come see him, so Nick might believe he should be a substitute for now.

The Young and the Restless certainly appears to be gearing up for a Nick and Chelsea pairing. We don’t know for sure if this is the road they’re headed down, but it would make sense to set up this possibility. There’s nothing that would get under Adam’s skin more than his own brother stealing his wife.

Of course, Adam would probably have to shut Chelsea out first. He may file for divorce to convince Chelsea that he’s giving up and she should, too. That could make Chelsea think there’s truly no hope for them as a couple.

If Y&R intends on putting Chelsea and Nick together, Adam will need someone to give him updates. Chloe (Elizabeth Hendrickson) would be happy to “help.” In fact, Chloe would take great pleasure in rubbing this news in Adam’s face.

Chloe might put on another sympathy charade and pretend she’s telling Adam for his own good. Then again, Chloe might snap a few pics of Nick and Chelsea getting cozy. She could have them delivered anonymously.

Regardless, you can bet that Chloe would want to cause more pain by showing Adam that he’s being replaced. That goes for any love interest Chelsea might choose. The Young and the Restless may not keep Chelsea waiting forever.

Justin Hartley’s new NBC series, This Is Us, will require a break at Y&R. It seems likely that Adam will push Chelsea away, but he’ll undoubtedly regret it later. Nick might make his move or someone else may eventually swoop in for some romance.

Either way, Chelsea will be feeling vulnerable and in need of comfort. Most fans would probably like for Chelsea to stay strong and keep fighting for her man. Unfortunately, women tend to be weak and needy on the CBS soap.

There are pros and cons to a desperate Chelsea though. Y&R may not always portray women in the ideal light, but it would give us some dynamite drama in this case. Once Hartley returns on a more permanent basis or a recast is brought in, Adam could gain his freedom and come home for an epic battle.

You’d better believe Adam would fight Nick to the death for Chelsea. Brotherly love would go right out the window. If Adam didn’t get Chelsea back right away, he could completely turn to the dark side. We might have Victor’s mini-me roaming around.

This time Adam might be a ready and willing successor to his father’s typically sinister throne. It might be fun to watch Adam take this route – at least for a while. If a Chelsea and Nick pairing led to that and more, would you be on board with the idea? Stay tuned and don’t forget to check CDL often for the latest Young and the Restless spoilers, updates and news.