‘The Young and the Restless’ Spoilers: Michael Graziadei Back as Daniel Romalotti Jr – Phyllis’ Son Takes Summer Away From GC? 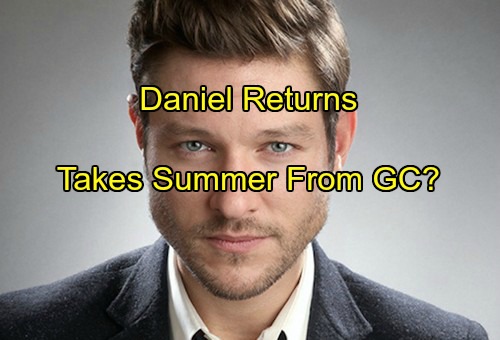 The Young and the Restless (Y&R) spoilers reveal that a huge return is on the way. EW is reporting that Michael Graziadei will be reprising his role as Daniel Romalotti Jr. Longtime Y&R fans will recall that Daniel is Phyllis’ (Gina Tognoni) son. Danny Romalotti (Michael Damian) is Daniel’s adoptive father.

Daniel been involved in several major storylines over the years, including the infamous accident that claimed Cassie’s (Camryn Grimes) life. He was suspected of drunk driving until it was revealed that Cassie was actually the one behind the wheel. Daniel also had his fair share of romances during his time on The Young and the Restless.

Will Daniel find love again when he returns to Genoa City? It’s tough to say since this is going to be a short stint. Graziadei will begin a limited run on August 25. Although Daniel’s stay will be brief, we know he’ll be around through the show’s 11,000th episode on September 1.

It sounds like The Young and the Restless has something big in the works for the special occasion. Y&R fans will be anxious to see what’s in store. Graziadei’s last appearance as Daniel aired back in 2013.

Since then, Graziadei has found success on dramas elsewhere. He’s had intriguing roles in The Lottery as well as Kingdom. Graziadei can currently be seen on an Amazon series called Good Girls Revolt. Luckily, Graziadei was still available for a return trip to the CBS soap.

Daniel could be included in some significant events. Many viewers are already speculating that Daniel could somehow usher his sister, Summer (Hunter King), off canvas for a while. Hunter King was recently upgraded to a series regular on Life in Pieces. As a result, King dropped down to recurring on Y&R.

Summer will remain a part of The Young and the Restless, but they might want to send her out of town if she gets busy with her other gig. Regardless, it should be interesting to see how Daniel’s return will affect his friends and family members. We’ll give you updates as we learn more about the reasons for Daniel’s homecoming.

So Y&R fans, what do you think about the news that Michael Graziadei is returning to The Young and the Restless? Are you looking forward to seeing Daniel again? Will Daniel stir up trouble or come back to support a relative?