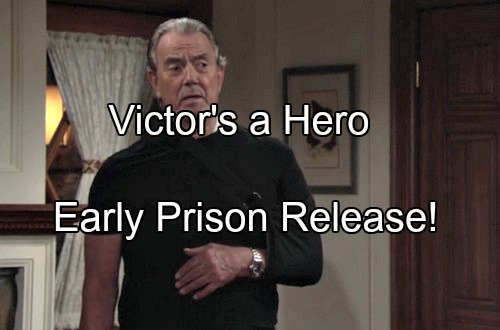 The Young and the Restless (Y&R) spoilers tease that things could be looking up for Victor (Eric Braeden). He’s spent a lot of time moping at the state pen lately, but he’s also been plotting his way out of misery. Fortunately, a superb exit strategy just fell right into Victor’s lap.

After Ian (Ray Wise) shot Victor and kidnapped Nikki (Melody Thomas Scott), Victor had to take action. Instead of contacting the authorities, Victor chose to save the day on his own. His heroic deed clearly eased some of the tension with Nikki.

She already loved Victor deep down, but this is exactly what she needed to nudge her toward forgiveness.

Victor undoubtedly loves Nikki as well. He wanted to help her, but he probably had additional motives. Victor may have capitalized on a valuable opportunity. When Victor and Ian faced off at the cabin, Vic made his intentions known. He suggested that Ian would be his ticket out of prison.

We all knew Victor would end up in this type of situation eventually. The Young and the Restless won’t make Victor stay in the slammer indefinitely. Let’s face it: the whole jail thing is getting kind of stale. It’s time to bust Victor out of this joint – legally, of course.

Now that Victor is a hero who saved Nikki’s life, the Newmans may start to change their tune. Nikki will likely lend her support. Victoria (Amelia Heinle) is typically quick to forgive Victor anyway, so she won’t be a problem. As for Nick (Joshua Morrow), he always gets on the bandwagon.

If everyone else goes soft on Victor, Nick is sure to follow suit.

Plus, we have Meredith’s (Alicia Coppola) to consider. She adores Victor, but she knows his heart belongs to Nikki. Meredith has come to care about Victor so much that she’d even help him win back his ex.

She’s a romantic and she wants Victor to be with his family. Meredith is convinced that they mean the world to Victor.

We need to remember that Meredith’s father is on the judicial review board. Adam (Justin Hartley) warned Judge Russell Gates (David Grant Wright) about Victor’s plan, but the circumstances have changed.

Victor looks like a doting family man and Adam looks like the wayward son who’s working against him.

Judge Gates may relate to that aspect of Victor’s storyline, too. Meredith said she used to have a rebellious brother. The judge may begin to see a little of himself in Victor. The Young and the Restless viewers know they tend to throw these backstory tidbits in for a reason.

Besides, Judge Gates has been trying to reconnect with his daughter. If he really wants to make it happen, Meredith may insist this is how it’s going to be. Once the Newmans and Meredith make all the right moves in court, Victor could easily find himself on the other side of those bars sooner than expected.

It’s worth mentioning that Judge Gates will be making a return Y&R appearance on July 22. Perhaps we’ll get this show on the road before long. It seems Ian Ward will indeed be Victor’s get-out-of-jail-free card. That’s good news for Vic and fans who are ready to move on.

When Victor is a free man, will he continue his efforts to bring down his betrayers or will he just focus on another evil scheme? We’ll give you updates on how all of this unfolds. Stay tuned to Y&R and don’t forget to check CDL often for the latest Young and the Restless spoilers, updates and news.