‘The Young and the Restless’ Spoilers: Adam’s Scheme Comes Back To Bite Him – Goes To Jail Over Ian Ward Escape Plan? 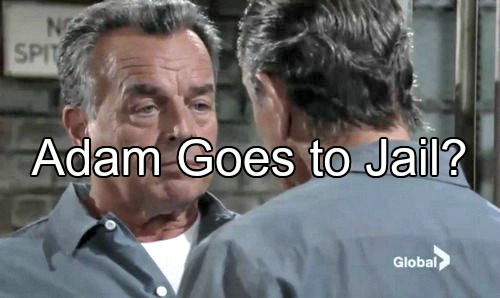 The Young and the Restless (Y&R) spoilers tease that Adam (Justin Hartley) will find he’s made some miscalculations. We know that Victor (Eric Braeden) is set to shake things up with his stunning confession. However, that won’t be the only surprise in store during Adam’s trial.

Y&R spoilers reveal that Adam’s scheme will come back to bite him. Does this mean his deal with Ian Ward (Ray Wise) will go awry? There are several options here. Chelsea (Melissa Claire Egan) thinks she convinced Ian to go along with the plan, but what if she didn’t?

It’s possible that Ian will realize he’s not getting his freedom. He could make Adam suffer by testifying against him.

On the other hand, Ian might fulfill his end of the bargain and expect Adam to do the same. When Adam doesn’t come through for him, Ian might find his own way out of his current jam. He’s a resourceful fellow. There’s no doubt that Ian could form a quick escape strategy.

If Ian makes his getaway and Adam looks like he’s connected to it, there’s going to be big trouble. Adam might get off the hook for Constance’s (Sally Kellerman) murder, but he could still land behind bars for aiding (or at least appearing to aid) Ian.

Obviously, the cops would frown upon that!

Regardless, Adam will be in very hot water. His sneaky tactic will turn out to be an epic flop. Chelsea will worry about Adam’s future, which is pretty much what she spends all of her time doing.

That’s just the way it is and Chelsea had better get used to it. Life is never easy for anyone tied to the Newman family.

As for Victor, he’ll continue plotting as he tackles questions from his brood. The Young and the Restless spoilers say Nick (Joshua Morrow) will stand up to his father and demand answers. Another Newman will join Nick’s efforts. Adam seems like a good possibility.

After all, Michael (Christian LeBlanc) and Kevin (Greg Rikaart) agreed that these brothers should team up.

Victoria (Amelia Heinle) already tried prying the truth out of Victor, but maybe Nick and Adam will have better luck. Victor will get grilled about what he’s done and what he could do moving forward. Will Victor stay tight-lipped about his wicked ways?

We’ll have to wait and see, but there are surely more twists ahead.

The whole revenge thing could become a bit stale if Victor doesn’t kick it up a notch soon. He needs to bring the heat or give it up. Since Victor isn’t the kind of guy who throws in the towel, he may take his retribution to another level.

Stick with The Young and the Restless for updates on any additional bombs Victor might drop.

So Y&R fans, what do you think about the news that Adam’s grand plan could go up in smoke? How will Adam’s scheming trip him up? Will Adam ever get out of this mess? When will Victor’s vengeance mayhem finally wind down?