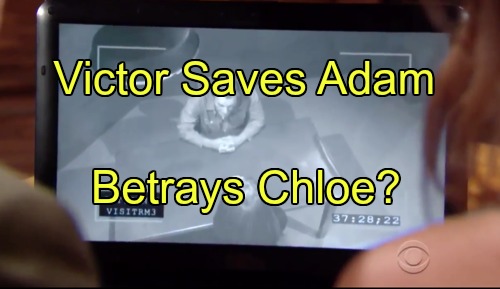 The Young and the Restless (Y&R) spoilers tease that some shocking moments are about do down. Adam’s (Justin Hartley) trial is near and things certainly don’t look good. He’s facing a mountain of evidence and most of Genoa City probably thinks he’s guilty.

Victor (Eric Braeden) put a great deal of thought into this setup. Adam knows he may not get the outcome he wants. He’s trying to hold out hope, but Victor may be only one who can come to his rescue. If Adam is relying on Victor to save him, he feels confident that prison is in his future.

However, Y&R fans can’t really know what’s going on in Victor’s manipulative brain. The Young and the Restless spoilers indicate that Victor will make a stunning move when he takes the stand later on this week’s epsiodes. The Newmans will be astonished when Victor makes an unexpected declaration.

Could Victor decide to save Adam from a life behind bars? Perhaps Victor has always had a particular twist in mind. Maybe the idea was to make Adam suffer and then let him off the hook.

It’s possible that Victor is using a similar tactic to teach Adam a lesson. Of course, there would be other motives in play. Victor could put on an act and claim he’s a changed man. He could admit to framing Adam for murder and suggest that he couldn’t let his son go down after all.

Meredith (Alicia Coppola) will be in the courtroom to hear Victor’s testimony, but he could easily explain his actions later. Victor might contend that he fell on his sword for Adam’s sake. He could say he lied to protect Adam because that’s just the kind of loving father he is. Aww. Isn’t that sweet?

The Young and the Restless viewers would roll their eyes, but Meredith might eat it up. She gets turned on by Victor’s sensitive side. This might make Meredith more determined than ever to help Victor get out of the slammer. She might have a battle on her hands thanks to Victor’s added charges, but that wouldn’t stop her. Where there’s a will, there’s a way.

As for Victor’s family, they could soften slightly. If Victor owned up to his mistakes, maybe the Newmans would start to see him in a new light. That could help Victor reconnect or allow him to blindside them with the ultimate revenge. Perhaps this has just been the preview to the main event.

That brings us to Adam. Victor needs someone in his corner and Adam is his best option. Adam has a manipulative side just like his father. He tries to fight it, but it always resurfaces. Victor’s grip on Adam often leads to bad news.

Victor may get Adam cleared of the charges, but there could be a catch. Victor might promise there’ll be more where that came from if Adam doesn’t cooperate from now on. He could easily take another route to vengeance. Adam could be blackmailed into being Victor’s permanent minion.

Speaking of minions, where does Chloe (Elizabeth Hendrickson) fit in all of this? Will Victor reveal her presumed role in the setup? In fact could The Moustache betray Chloe and blame her for the setup?

Regardless, Chloe isn’t going to be happy without a payoff. Adam had better hope that Victor exposes her. If not, Chloe could seek retribution on her own.

Chloe still wants Adam to pay for Delia’s (Sophie Pollono) hit-and-run accident. There’s no predicting how far Chloe will go to avenge her daughter’s death. Will Adam dodge one bullet and get hit by another?

We’ll give you updates as this Y&R storyline develops. Stay tuned and don’t forget to check CDL often for the latest Young and the Restless spoilers, updates and news.