‘The Young and the Restless’ Spoilers: Search For Victor’s Accomplice as Natalie’s Name Cleared – Hilary Hits On Jack 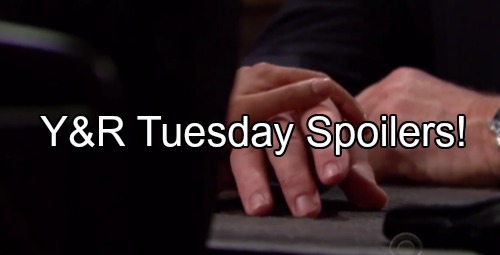 The Young and the Restless (Y&R) spoilers for Tuesday’s episode, June 28, tease that Natalie (Mara McCaffray) will try to convince Kevin (Greg Rikaart) that she’s innocent. She’ll maintain that she wouldn’t be helping Kevin if she knew it would point to her guilt.

Kevin will head over to Newman to buy them a little more time. They still have some investigating to do.

Luca (Miles Gaston Villanueva) and Summer (Hunter King) will stand by the idea that Travis (Michael Roark) is to blame. Victoria (Amelia Heinle) won’t buy it. She’ll insist that Travis only threw a punch because Luca got nasty.

Summer will be alarmed by Luca’s trash-talking, but he’ll claim it was no big deal.

Kevin will arrive and announce that he doesn’t know who sabotaged Newman yet. Nick (Joshua Morrow) will disagree. Mariah (Camryne Grimes) told Nick about Natalie’s possible involvement. Victoria won’t be sure that sounds right.

Natalie stabbed Victor (Eric Braeden) in the back once and he probably wouldn’t want to work with her again.

Y&R spoilers indicate that Natalie will show up with additional security footage. She’ll insist she has an alibi for the times of those visits. Natalie will admit that she hacked the Newman computer system once for Billy (Jason Thompson), but she hasn’t done it since then.

Eventually, they’ll all determine that someone else must be behind this mess.

Luca will pipe up that he’ll work with Summer. They can find out who’s the true threat. Nick’s words will ring in Summer’s ears. He told her to trust her instincts and it seems those instincts are telling her that Luca is bad news.

Other Young and the Restless spoilers say Mariah (Camryn Grimes) will encourage Sharon (Sharon Case) to try some of the tips the therapist offered. Maybe some hypnosis or meditation could relieve her Sage (Kelly Sullivan) visions. Sharon will get snappy and Mariah will become concerned. She’ll ask if Sharon is taking her medications.

Nick will stop by to deliver updates on Natalie. He’ll say it looks like someone else sabotaged Newman. While Sharon cares for Sully upstairs, Mariah will tell Nick that Sharon is taking her meds. Meanwhile, Victoria will drop by Billy’s place to accuse him of setting up the oil leaks.

Billy will deny it and lash out at Victoria for believing Travis’ side of the story.

At the athletic club, Ashley (Eileen Davidson) will remind Phyllis (Gina Tognoni) that it’s Jack’s (Peter Bergman) birthday tomorrow. She’ll think Phyllis should take Jack to the Abbott cabin to celebrate. Jack will get filled in and he’ll love the suggestion. Billy, on the other hand, won’t be too pleased.

He’ll try to talk Phyllis out of going, but she’ll think he’s asking too much.

The Young and the Restless spoilers reveal that Hilary (Mishael Morgan) will share a tender moment with Jack. She’ll tell Jack about a quarrel she had earlier with Lily (Christel Khalil). In spite of the conflict, Hilary will be grateful that Jack convinced her to stay in town.

Things will get awkward when Hilary touches Jack’s hand. He’ll pull it away and mention his getaway plans with Phyllis.

Later, Hilary will inform Lily that she owns the athletic club property with Devon (Bryton James). As soon as Hilary gets her hands on the deed, she intends to throw Lily right out. Will it take a full relapse to halt Hilary’s schemes?