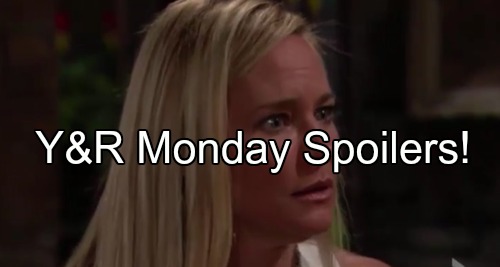 The Young and the Restless (Y&R) spoilers for next week’s episode on Monday, June 27, tease that Adam (Justin Hartley) will believe Victor (Eric Braeden) has sealed his fate. Chelsea (Melissa Claire Egan) will mention that they don’t know anything about the contents of the bottle yet.

Adam will think it’s a no-brainer. Victor has covered all his based and intends to put Adam behind bars.

Dylan (Steve Burton) will state that it’s risky to let Adam keep his freedom right now. He could be a flight risk. However, Connor (Gunner and Ryder Gadbois) will come out and tug at Dylan’s heartstrings. He’ll let Adam stay home as long as a guard remains by the door.

As Chelsea and Adam spend time with Connor, she’ll ask if Adam has given up hope. Adam will try to stay positive, but he’ll admit that it’s hard when the evidence just keeps piling up. Meanwhile, Nick (Joshua Morrow) will spar with Victor over the trouble the Newmans are facing.

He’ll blame his father, but Victor will toss the blame right back.

Victor will contend that his family members are the only ones at fault for their misfortune. He’ll urge Nick to leave. Later, Michael (Christian LeBlanc) will arrive and attempt to help Adam. Victor won’t offer any info or ways to get Adam off the hook. He’ll intend on speaking his mind in court.

Other Young and the Restless spoilers say Mariah (Camryn Grimes) will encourage Sharon (Sharon Case) to meet with a therapist. Despite Sharon’s persistent visions, she won’t be interested. Sage (Kelly Sullivan) will continue to torment Sharon in Monday’s episode.

In light of Mariah’s new job, Sage will snap that Sharon won’t stop until she takes everything from her. She’ll state that Sharon ditched her meds in hopes of preventing these visions, but she shouldn’t count on it working. Sage will also rant about Sharon keeping Nick’s son away from him.

She’ll insist that Sharon is ruthless and pathetic.

Faith (Alyvia Alyn Lind) will catch Sharon shouting, “Go away!” Sharon will try to cover up the incident, but Faith will remain concerned. When Nick stops by, Faith will mention that she heard her mommy yelling. Sharon said something about her meds.

At Crimson Lights, Natalie (Mara McCaffray) will claim she’s not Victor’s accomplice. She would’ve done a better job of hiding the proof if she was actually involved in a sabotage scheme. Kevin (Greg Rikaart) won’t be sure what to believe. He’ll visit Victor to get to the bottom of it.

Unfortunately, Victor will stay tight-lipped about his latest partnership. After Kevin gives up and heads out, he’ll observe a security camera. Back at Crimson Lights, Mariah will meet with the therapist she contacted. She’ll say she’s dealing with horrible guilt and constant nightmares.

Once the session ends, Natalie will hint that Mariah is setting her up to look like she’s working for Victor. She’ll think Mariah just wants rid of her so she can have Kevin back. Mariah will hear the sabotage news and rush home. She’ll give Sharon and Nick updates on Natalie’s possible involvement.

Kevin will return to Natalie and they’ll hack into the state pen’s security footage. A woman who looks like Natalie has been visiting with Victor. Natalie will stare at the screen in disbelief. She’ll try to convince Kevin that she’s not the one in the footage.

Y&R buzz suggests Chloe (Elizabeth Hendrickson) is the real culprit. Stay tuned to see if Kevin can sort this mess out.

Plenty of fireworks happening next week on #YR pic.twitter.com/LdMiGgkHct