BY Heather Hughes on June 23, 2016 | Comments: one comment
Related : Soap Opera, Spoiler, Television, The Young and the Restless 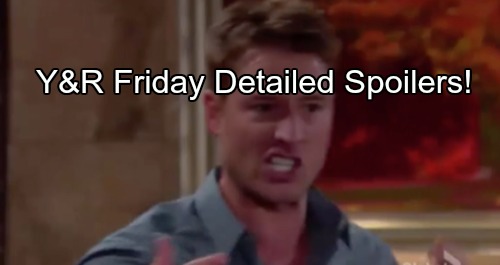 The Young and the Restless (Y&R) spoilers for Friday, June 24, tease that more trouble is headed Adam’s (Justin Hartley) way. Dylan (Steve Burton) will arrive at the penthouse and another officer won’t be far behind. Adam will get updates on the second exhumation of Constance’s (Sally Kellerman) body.

The autopsy results once again showed she was full of poison.

The police will do a thorough search and find a storage unit key. Adam will suggest that Sage (Kelly Sullivan) wanted one for Constance’s belongings after she passed away. Michael (Christian LeBlanc) will seem worried, but Adam will assure him that he’s never even been there.

Adam won’t think the police will find anything they could use against him. Poor Adam has underestimated The Moustache!

Of course, Y&R viewers know that Adam is dead wrong. After receiving instructions from Victor (Eric Braeden), his secret partner will head over to the storage unit. She’ll pull out a vase and place a tiny bottle in it. Perhaps it contains poison that will match the type found in Constance’s body.

The accomplice will put the vase back where she found it and move along.

A cop will eventually return with the bottle and hand it over to Dylan. Naturally, Dylan will think this points to Adam’s guilt. Chelsea (Melissa Claire Egan) will freak when Dylan wants to haul Adam away in Monday’s episode. Things aren’t looking good for this framed fan favorite.

Other Young and the Restless spoilers say suspicions will swirl about Luca (Miles Gaston Villanueva). Travis (Michael Roark) will encourage Victoria (Amelia Heinle) to do some investigating. He’ll feel confident that nothing will point to him. Travis will believe Luca is the guy Victoria should be concerned about.

Nick (Joshua Morrow) will offer to help Victoria sort all of this out. Later, he’ll notice Luca and Summer (Hunter King) canoodling at the pool bar. Nick will speak with Summer alone. He’ll hint that Luca may be lying. Travis denied making any type of confession.

Summer will talk to Luca about it, but he won’t react well. He’ll indicate that he worked hard to put out the PR fire, but no one is giving him any gratitude. Summer will claim she has faith in Luca, but the look on her face will tell a different story.

Y&R spoilers reveal that Kevin (Greg Rikaart) will show up at Newman Enterprises to assist Victoria. She’ll give him the computer codes so he can take a look at the info. Victoria will hope that Kevin can put them on the right track. When Kevin starts investigating, he’ll be stunned by what he finds.

A short time later, Kevin will confront Natalie (Mara McCaffray) with the news of his discovery. He’ll demand to know how long she’s been working with Victor. Will Natalie be able to explain? Stay tuned to see how Natalie responds to Kevin’s accusations.

Meanwhile, the warden will warn Victor not to pull any stunts while he’s on his upcoming court excursion. The guards will shoot to kill if anything happens. In the visiting area, Nick will meet with Victor to discuss his potential partners.

He’ll wonder if Travis or Luca might be working with Victor.

Nick will want to prevent heartbreak for the Newman women. Victor will insist that he’s not in cahoots with their beaus. At Hank’s bar, Victoria will let Travis know that she still has doubts. She won’t think she can take being wrong about him.

Travis will promise that he can be trusted. They’ll share a kiss, but Victoria will likely remain wary. Does Travis have more secrets or is Luca the only snake in this scenario? Stick with the CBS soap to see what else will be uncovered.