‘The Young and the Restless’ Spoilers: Justin Hartley Starts Filming ‘This Is Us’ for Rival NBC – Adam’s Y&R Future Uncertain

BY Sean O'Brien on June 23, 2016 | Comments: one comment
Related : Hot News, Soap Opera, Spoiler, Television, The Young and the Restless 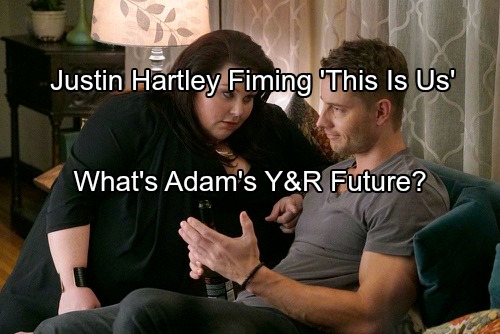 The Young and the Restless (Y&R) spoilers tease that filming is about to get started on Justin Hartley’s new primetime series, This Is Us. The NBC drama will make its debut this fall, but Y&R viewers are wondering how Hartley’s new role will affect his current one as Adam Newman on the CBS soap. Adam is a key character and losing Hartley would be a tough blow.

As of right now, CBS and Hartley are staying tight-lipped on his status with the show. We haven’t heard anything about Justin Hartley’s departure, but that hasn’t stopped fans from worrying. When a leading man snags a major part on a rival network, there’s cause for concern.

It’s hard to believe that Hartley will continue his run as usual on The Young and the Restless. At the very least, we should probably expect reduced airtime. Nevertheless, CBS Soaps in Depth is reporting some positive updates on the situation.

Although the pilot for This Is Us was filmed in New York City, the rest of the series will be filmed in California. That could be good news for Y&R watchers. Since The Young and the Restless also films in California, perhaps Hartley will be able to juggle two shows. The fact that Hartley won’t have a lengthy commute could persuade him to squeeze in both projects.

Of course, Hartley will still have an extremely demanding schedule on his hands. Soaps are notorious for making actors work long hours and memorize massive amounts of dialogue. When you try to add on an important primetime role, it could become too much for Hartley to handle.

If Hartley drops down to recurring, that might ease the work load. However, that could create problems as well. Adam is the kind of character who needs to be front and center. If Hartley eventually decides to leave entirely, it would leave the CBS soap with a difficult decision.

The Young and the Restless may be forced to write Adam out for a while. They could send Adam to prison in hopes that Hartley’s new series will flop. It would be easy to release Adam after a long appeal process.

Another option would be to kill Adam off, but it’d be a shame to lose this complex character. They could always bring him back from the dead, but it would seem ridiculous since they’ve already gone down that road. Even so, it might happen.

They could also bring in a recast, but that would be a risky move. Y&R struck gold when they found Justin Hartley after Michael Muhney’s firing which turned many fans against the show. They may not be so lucky the next time they go Adam hunting. Since the character is so popular, the ratings could take a hit without a suitable Adam on the frontburner.

We’ll all be waiting to see how this plays out. Will Justin Hartley find a way to make it work or are we destined to lose another Adam? Voice your opinion in the comments below and don’t forget to check CDL often for the latest Young and the Restless spoilers, updates and news.