‘The Young and The Restless’ Spoilers: Who is Sabotaging Newman Enterprises – Vote in Our Poll 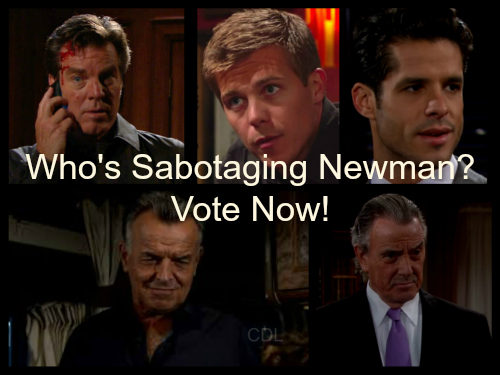 The Young and The Restless (Y&R) spoilers reveal that the Newman Oil sabotage is not done yet. But who is behind the trouble that could knock Victoria Newman (Amelia Heinle) out of her CEO chair? Is it an inside job? Is the saboteur a Newman family member? Or is it a Newman enemy? Vote in the POLL below.

Victor Newman (Eric Braeden) is the obvious choice as the person engineering the oil division’s disasters. It’s not that Victor isn’t capable of sabotage – he is. But would he do something that could take down his company once and for all? Doubtful. After all, Victor plans to get out of jail and take the reins again, so he wants there to be a company left for him to come back to.

But The Young and The Restless spoilers hint that Victor may think he can rebuild Newman Enterprises from the ashes.

Ian Ward (Ray Wise) is a likely culprit. He hates the Newmans and would gleefully topple the family business and burn it to the ground. Ian has contacts on the outside thanks to his cult leader days and no doubt could get a devotee to make trouble on the Newman rigs.

He tried and failed to take down NE with Paragon, so this might be another attempt to destroy Victor and the other Newmans. Ian is capable of doing absolutely anything to his enemies, so it’s possible he’s behind the mess.

Luca Santori (Miles Villanueva) is another likely contender. He wanted a foot in the door with the Newmans and his relationship with Summer Newman (Hunter King) is not enough. He wants to be at NE and part of the team. Could Luca be rigging crisis after crisis so he can be there to play hero and become indispensable to Victoria?

The Young and The Restless spoilers tease that Luca will stop at nothing to become a de facto Newman. Plus, Luca was taught by his dad to play dirty.

Travis Crawford (Michael Roark) is another sabotage candidate. Everyone keeps saying it’s awfully convenient that he used to trade in oil futures and waltzed into Victoria’s life right as these incidents occurred. But it was Victoria that inserted herself in Travis’ life, not the other way around.

Luca may be setting Travis up as a fall guy, but it’s doubtful Travis is the culprit and is a victim of bad timing. Luca tried to pay Travis to skip town, so it seems like he may be a scapegoat, not a perpetrator.

Marco Annicelli (Peter Bergman) is missing and assumed dead, but that man is as killable as a cockroach. Y&R fans are waiting with baited breath for him to return and wreak havoc. Since Marco may be on the loose and faked his death to get out of prison, he could be sabotaging the Newman rigs personally.

You’ve heard the saying “an eye for an eye”? Maybe Marco is doing his version “an oil rig for an ear” since his was lopped off by Victor’s henchmen. Marco would definitely go after NE!

What do you think Y&R fans? Who do you think is responsible for the sabotage at Newman Oil? Vote in the POLL and share your comments below – and be sure to come back to CDL often for more The Young and The Restless spoilers and news.