BY Heather Hughes on July 5, 2016 | Comments: one comment
Related : Soap Opera, Spoiler, Television, The Young and the Restless 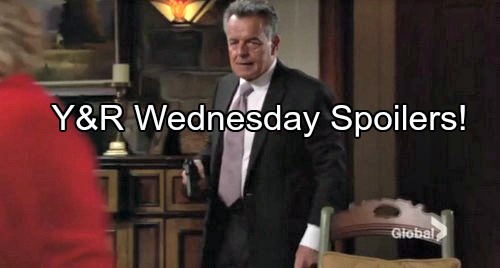 The Young and the Restless (Y&R) spoilers for Wednesday’s episode, July 6, tease that Luca (Miles Gaston Villanueva) will try to keep Summer’s (Hunter King) mind off her family’s problems. They’ll make love, but Summer will eventually tear herself away to look at her messages.

She’ll be shocked when she gets updates on the shooting and Nikki’s (Melody Thomas Scott) abduction.

Luca will join Summer as they head over to the hospital. Once they arrive, they’ll learn that Dylan (Steve Burton) and Paul (Doug Davidson) pried some news out of Meredith (Alicia Coppola). When Summer hears that Nikki is at the cabin with Ian (Ray Wise), she’ll start to panic.

Summer will state that Phyllis (Gina Tognoni) is staying there. Paul and Dylan will rush off to stop the madness.

The Young and the Restless spoilers say Summer and Luca will decide to track down Jack (Peter Bergman). Nick (Joshua Morrow) and Victoria (Amelia Heinle) will grill Meredith about why she’s still trying to help Victor.

They figure it must have been humiliating to hear Victor call her a liar on the stand. Meredith will admit that she’s fallen for Victor, but she’ll imply that his heart still belongs to Nikki.

At the cabin, Victor and Ian will try to sort out the details of a deal. Ian will agree to let Phyllis go, but she won’t leave without Nikki. An argument will ensue, but Ian will eventually give both women their freedom.

Nikki will pause to give Victor a thoughtful look as she moves toward the door.

Victor will pull up his banking website and deliberately enter an incorrect password. He’ll announce that the cops are now on their way. Victor’s sneaky move tipped them off.

Ian will think Victor has guts, but he won’t be sure Victor knows what he’s doing. He may not get the outcome he wants.

Y&R spoilers say Ian will hand over his gun, but Victor will contend that shooting him wouldn’t make them even. He’ll hint that Ian is going to be his ticket out of prison. Nikki will watch the scene unfold through a window.

Once Paul and Dylan burst in, they’ll take Ian into custody. Victor and Nikki will share a tender moment as she expresses her gratitude. Nikki will gaze longingly at Victor as he’s led away.

At the athletic club, Jack will make Billy (Jason Thompson) anxious when he brings up Phyllis. Jack will suggest that he knows what’s wrong. He’ll blame Billy’s demeanor on the issues they faced over Brash and Sassy.

Jack will contend that brothers are going to bicker, but they’re still bros at the end of the day.

Summer and Luca will show up to tell Jack about Phyllis’ dangerous situation. Billy and Jack will want to assist Phyllis ASAP, but she’ll walk through the door. As Phyllis falls into Jack’s arms, Billy will seem miserable.

Meanwhile, Luca will offer Summer an apology for causing a distraction earlier. He’ll make it clear that he wants to support Summer in all aspects of her life. Does Luca really mean that or will his business goals cause additional strife?

Stick with the CBS soap to see if more trouble is in the works.