‘The Young and the Restless’ Spoilers: Is Meredith Pregnant with Victor’s Baby – Another Little Newman on the Way? 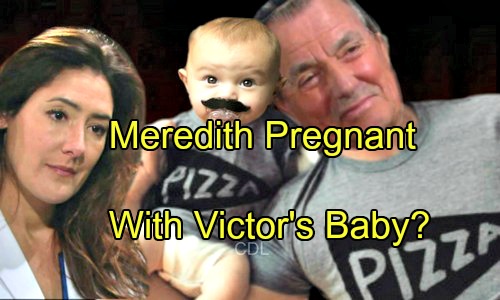 The Young and the Restless (Y&R) spoilers tease that big changes could be on the way for Victor (Eric Braeden). Ever since Victor landed behind bars, he’s had two goals on his mind. One is revenge against his family. The other is getting out of prison ASAP.

From the beginning, Victor has been hoping Meredith (Alicia Coppola) can be his get-out-of-jail-free card. Meredith’s father, Russell, is on the judicial review board and could have Victor out of his cell in no time. Unfortunately, Adam (Justin Hartley) seemingly blew that plan when he tipped off the judge to Victor’s scheme.

However, Victor appears to have moved forward with the plot anyway. He’s got Meredith wrapped around his little finger. Meredith can’t resist Victor, which she’s proven by instigating infirmary sex sessions. Forget keeping it professional! Meredith has to have her Victor fix.

Y&R viewers know that soap couples never use protection and the women are often incredibly fertile. Age never matters much either. You see where we’re going with this. Could Meredith be pregnant with Victor’s baby? 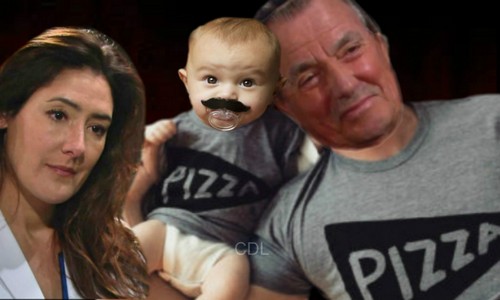 Victor is old enough to be a great-grandfather, but would that really stop The Young and the Restless from giving him a newborn of his own? Of course not! They do what they want and logic goes out the window. It’s all about drama on the CBS soap.

Now that Victor has rushed to rescue Nikki (Melody Thomas Scott) from Ian’s (Ray Wise) clutches, it looks like some warm moments are coming up. Once all of this is over, Victor and Nikki could start inching toward a reunion.

If Meredith has a bun in the oven, it could tear them apart all over again. Nikki wouldn’t be pleased by the news.

On the other hand, this might work out perfectly for Victor’s exit strategy. Victor needs Meredith’s dad on his side to secure his freedom. Russell wouldn’t be happy to hear that Victor knocked up his daughter, but Meredith might convince him to ignore his anger.

She could urge her father to think of his grandchild.

Russell wouldn’t like the idea of Victor being tied to his daughter forever, but Meredith obviously thinks Victor is a good guy. If she sang Victor’s praises enough, Russell might agree to push for Victor’s release. Daddy’s little girl could get what she wants.

Victor would finally be free from the state pen and could get back to sitting on the Newman throne. As for the baby, there’s no guarantee that Meredith will actually deliver him or her. She could end up having a miscarriage, especially since she’s not exactly a spring chicken.

Characters often lose their babies on The Young and the Restless. A high-risk pregnancy makes that option even more likely. Still, there’s a chance that Victor could truly add another member to his brood. Stranger things have happened on Y&R!

We’ll give you updates if we hear anything else about this possibility. It would certainly cause shockwaves for the rest of the Newmans. Stay tuned and don’t forget to check CDL often for the latest Young and the Restless spoilers, updates and news.