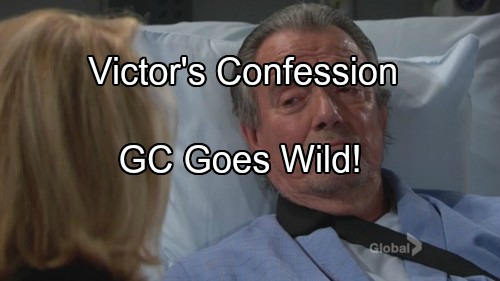 The Young and the Restless (Y&R) spoilers tease that Adam (Justin Hartley) will be desperate to prove his theory. When Adam was accused of Constance’s (Sally Kellerman) murder, he knew Victor (Eric Braeden) had to be behind it.

Now that they have footage of Victor meeting with a mystery woman, Adam is convinced that they conspired against him.

Chelsea (Melissa Claire Egan) will do everything she can to help Adam beat the charges. Kevin (Greg Rikaart) and Natalie (Mara McCaffray) will also do their best to clear all of this up. They’ll be working nonstop to track down Victor’s accomplice.

Meanwhile, Adam will try to get through to Dylan (Steve Burton). He’ll maintain his innocence and insist that he needs to confront Victor. Adam will likely believe he can pull some answers out of his old man. His efforts have proved futile so far, but it looks like things could start to shift.

Nikki (Melody Thomas Scott) is warming up to Victor and it appears she wants to give him another chance. The Young and the Restless spoilers say Nikki will have a heartfelt chat with Victor as he recovers in the hospital. She’ll admit that she doesn’t want to walk away from him.

Victor will undoubtedly be pleased by the news.

Now Victor could be on the path to reconciliation with Nikki and his children. That means Victor will decide to try something new for a change. He’ll actually be honest! We don’t know how much Victor will confess, but he’ll at least hint that Sage’s (Kelly Sullivan) diary was indeed forged.

Victor will suggest that the true journal entries are still out there somewhere. This could be a pretty big deal. If these pages resurface, it would prove that something fishy went down. Adam could be exonerated when signs of a setup become undeniable.

However, there’s another reason the genuine version of Sage’s diary is important. She could’ve easily said something about Christian’s paternity in her journal. If the entries are found, Adam’s secret may come to light.

Sharon (Sharon Case) might panic when this gets stirred up again. Even Sage’s name strikes fear in Sharon’s heart at this point. Of course, Sharon might calm down a little if she learns Christian doesn’t belong to Nick (Joshua Morrow). She might actually feel a sense of relief.

After all, Adam was willing to stay quiet when he thought Christian was alive. Sharon might contend that Adam was going to let someone else raise his child anyway. Adam and Chelsea are happily caring for Connor (Gunner and Ryder Gadbois). Dylan and Sharon have Sully. Everybody wins…well, except for poor Nick.

Nevertheless, Sharon could feel like the pressure’s off. She might finally begin to relax. That’s exactly when the next bombshell should drop. Y&R viewers know that trouble is brewing when characters let their guards down.