‘The Young and The Restless’ Spoilers: Adam’s Escape From 30 Year Prison Sentence Based On Real Supreme Court Decision 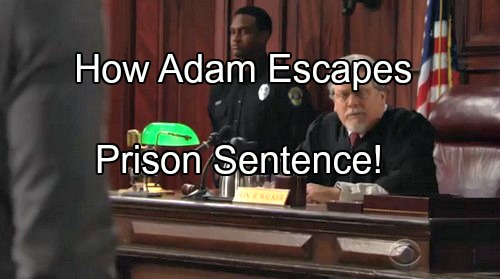 The Young and the Restless (Y&R) spoilers expose an avenue whereby Adam can escape his 30 years prison sentence by having it vacated by the appeal process. After the July 18 Y&R episode we know Adam was forced to make a plea deal and plead guilty to murdering Constance Bingham since he could offer no defense – even though he was innocent of the crime.

As it turns out the crew at Y&R used a real-life as the basis for this and as The Young and the Restless spoilers show this will allow for Adam’s sentence to be overturned down the road.

Kudos is offered to the research and writing staff at ‘The Young and the Restless’. Use of a real-life legal precedent was injected into the script this week of July 18. A 1970 United States Supreme Court decision was used as the basis of Adam Newman’s (Justin Hartley) plea agreement.

Michael (Christian LeBlanc) begrudgingly counseled his client to accept what’s known as an Alford plea. That legal precedent was established when the United States Supreme Court upheld a plea Henry Alford accepted after being charged with first-degree murder in North Carolina in 1963. Alford proclaimed his innocence, but understood that overwhelming evidence would likely result in him being convicted and sentenced to death.

Alford agreed to enter a guilty plea without making an admission of guilt. He subsequently pled guilty to second-degree murder, but noted in court that he hadn’t committed the crime. Alford knew that a maximum prison sentence of 30 years was tied to his agreement.

A federal appeals court later ruled that Alford’s plea was involuntary and vacated his sentence. Young and the Restless spoilers indicate that Adam could use a similar path to freedom once the evidence emerges that clears his name.

Hartley’s character, having been written into a similar legal corner on ‘The Young and the Restless’, agreed to the Alford plea, reaffirmed his innocence in court, was found guilty in light of existing evidence and sentenced to 30 years in Walworth State Prison.

Loyal viewers of ‘The Young and the Restless’ recall that Adam was previously convicted of killing Delia (Sophie Pollono), though that crime was tagged as accidental. His resulting 10-year sentence was later reduced to probation and community service. That Victor-inspired (Eric Braeden) reprieve pushed Chloe (Elizabeth Hendrickson) over the edge and eventually motivated her to participate in Adam’s frame.

Maintaining his innocence, but facing overwhelming evidence, Adam opted to make the Alford plea. Those who strike soap operas, like ‘The Young and the Restless’, as having absurd plots might not know that the professionals who create fiction within this genre research reality for use in various arcs. And with that said, TV class is dismissed.

CDL is a leading source for everything linked to ‘The Young and the Restless’ so make sure to return often for more Y&R spoilers, news and casting updates.