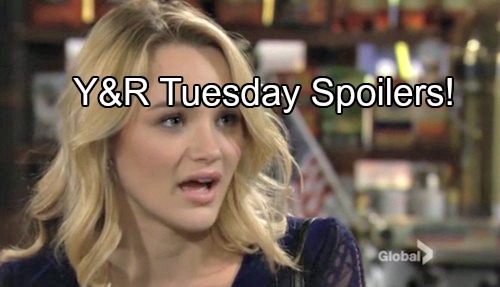 The Young and the Restless (Y&R) spoilers for Tuesday, July 19, tease that Chelsea (Melissa Claire Egan) will be determined to get some answers from Victor (Eric Braeden). Unfortunately, her mission won’t lead to any big details. Chelsea will threaten Victor with the scalpel, but he won’t provide the identity of his accomplice.

Nevertheless, Chelsea will at least get Victor to admit that he framed Adam (Justin Hartley). Victor will contend that he never meant for Adam to end up prison. He just wanted to scare his son a little.

Victor will add that Chelsea might want to think twice about using that scalpel. She wouldn’t want to take away Connor’s (Gunner and Ryder Gadbois) remaining parent. Chelsea will head home to complain to Anita (Catherine Bach). She’ll be livid that Victor forced Adam into this situation.

Anita will notice the scalpel in Chelsea’s purse. She’ll urge Chelsea to think about her own fate. Chelsea will insist that she’s doing whatever it takes to help her husband. After tossing Anita out, Chelsea will have a major meltdown. She’ll fling objects around the room in despair.

Meanwhile, Nikki (Melody Thomas Scott) will grow concerned about Victor’s appeal. She’ll want as many people in his corner as possible. She’ll consider the idea of asking for Chelsea’s help, but Paul (Doug Davidson) won’t think that’s a good plan. He’ll also point out that Victor shouldn’t be trusted.

Nikki will chat with Victoria (Amelia Heinle) about Victor’s future. Victoria will have some doubts about whether or not Victor deserves their loyalty. Nikki will be confident that Victor had nothing to do with Adam’s predicament. She’ll think it’s time for Victor to have his freedom back.

Victor will return to the state pen and seek out Adam right away. Adam will coldly state that Victor has won. Victor will assure Adam that this wasn’t the outcome he had in mind. Adam will guess that someone threw Victor’s plans off course.

Victor will give Adam the news that he intends on getting him out of there. Victor just has to secure his own freedom first. Adam will bring up the threat Chelsea poses. He’ll suggest that Victor has made a dangerous enemy in Chelsea. Victor won’t be worried. He’ll think Chelsea’s fury will die down eventually.

At Sharon’s (Sharon Case) house, Mariah (Camryn Grimes) will seem glum as she prepares to move out. Sharon will recall sharing the secret and how much Mariah valued her trust. She’ll stop Mariah from leaving and try to talk her out of making this move. After some arguing, Mariah will agree to stay with Sharon for now.

Other Young and the Restless spoilers say Victoria will rip into Summer (Hunter King) when she finds her relaxing with Luca (Miles Gaston Villanueva) at The Dive Bar. Victoria will state that there’s a walkout thanks to the problems at the oil refineries. Summer will contend that Victoria hasn’t been at work to handle everything. She’ll blame Victoria for the state of Newman Enterprises.

Victoria will order Summer to head back to the office. Luca will appreciate that Summer is on his side. At Newman, Summer will inform Victoria that her outburst was just a charade. She’ll insist that she wants to see what else Luca is hiding. Victoria will be on board, but she’ll want Summer to proceed with caution.

When Luca comes in, Victoria will pretend to fire Summer. Luca will accompany Summer back to The Dive Bar. They’ll object to Victoria’s CEO tactics and Luca will offer Summer as an alternative leader. He’ll believe he can help Summer if she convinces Victor she should be in power.

As Luca walks away to take a phone call, Summer will glare in his direction. Y&R spoilers reveal that Luca will be blindsided by Summer’s sneakiness. Will Luca retaliate or will he try to make amends instead? Stick with the CBS soap for updates on the drama ahead.