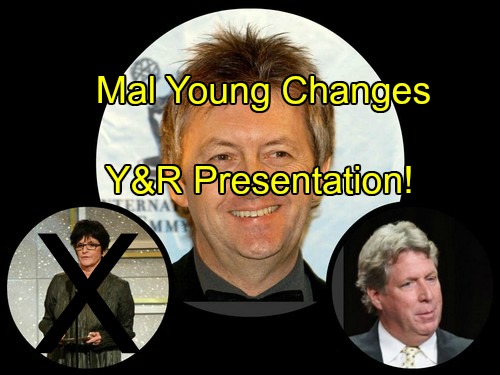 Until recently, ‘The Young and the Restless’ offered viewers three sets of scenes that evolved throughout the hour-long broadcast. However, an increase in the volume of grouped stories, sometimes up to five different sets of scenes per episode, indicates a change in philosophy. Tighter scripts, along with a greater volume of actors being seen on a daily basis, creates a different vibe moving forward.

It would be obvious to point to Y&R Executive Producer Mal Young as the influential force behind this noted change on CBS’ iconic steamer. The departure of executive producer Jill Farren Phelps, as with other past back office changes, naturally creates different dynamics. In this instance, ‘The Young and the Restless’ has shortened the length of individual scenes for various reasons.

The actual content of each show of The Young and the Restless runs approximately 35 minutes long, discounting time the opening and closing theme, midpoint break and commercials. Unless an event show was scheduled, or there was a dramatic sequence playing out, three sets of scenes, averaging approximately 11 to 12 minutes each per episode, were scheduled.

Simple math reveals that five sets of scenes results in four-plus minutes being cut from each scene per day, or an average of seven total minutes per scene within each daily episode.

This change likely means that the decision-makers at ‘The Young and the Restless’ believe that the modern audience can digest more fictional information within the traditionally allotted time space. The travails of more characters are then shown within every episode. That might entice more pockets of the audience to tune in more often.

Consistently engaging content is the needed element within all forms of popular serialized entertainment. As many cable outlets and streaming services have proven, a sizable market for episodic shows still exists.

Clearly, a deep fragmentation of the entertainment audience, along with shifting cultural beliefs in what represents so-called “good entertainment” has reduced the number of people who choose to invest their time in broadcast network daytime dramas.

But, the four remaining soap operas are still profitable due to existing fan bases. So, it will be interesting to see how Y&R’s content choices and new scene strategy might change its audience size in whatever direction.

CDL is a leading source for everything linked to Y&R so make sure to come back often for all of The Young and the Restless spoilers, news and casting updates.