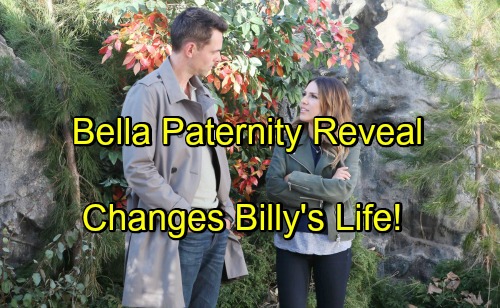 The Young and the Restless spoilers tease that Billy (Jason Thompson) will soon learn that Bella (Cali May Kinder) is his daughter. Chloe (Elizabeth Hendrickson) met with Billy recently and introduced the girl whose father remains a mystery to everyone in Genoa City. Of course, viewers know that an unauthorized DNA sample was used to create the child who seems to be Billy’s flesh and blood.

It’s true that Kevin (Greg Rikaart) could just as easily be Bella’s dad. That scenario would establish a nice storyline, considering the rekindling that’s been seen with Khloe in recent weeks. However, for the moment, let’s stay on the Billy-boy path.

Purely as a refresher for fans who are unfamiliar with the backstory: Chloe and Billy (then played by multiple Emmy Award-winning actor Billy Miller) were destroyed after their daughter Delia (Sophie Pollono) was killed. Adam Newman (then played by Michael Muhney) was and is perceived to be the person who accidentally hit Delia on a dark night in the fall of 2013.

Chloe subsequently committed many emotionally-based actions after not being able to come to grips with the loss of her child. One of them included taking a sample of Billy’s DNA from a lab and having herself artificially inseminated. She later gave birth to her second child.

Chloe returned to town earlier this year. She was drawn back by Victor (Eric Braeden), who foolishly used her to frame Adam (then played by Justin Hartley) for the murder of Constance Bingham (Sally Kellerman). That bizarrely misguided attempt at discipline proved disastrous.

Chloe went rogue, Adam was unjustly jailed and later was believed to have died when Victor, attempting to right his own wrong, helped his son to escape.

The reckless behavior that Bella’s mother (Chloe) exhibited in willingly framing Adam was then topped. She shot him with a dart gun while he was hold up in a cabin after having escaped prison.

Viewers weren’t shown what happened after Adam passed out, but it remains possible that Chloe left him unconscious prior to the building exploding, possibly caused the explosion herself or has him in captivity at an undisclosed location.

Body language evidence indicates that Chloe has shrugged off Adam’s death, or disappearance, as pure revenge justice delivered. Along with that she is still withholding Bella’s paternity from the man (Billy) who she believes is also her second daughter’s father. But, through this twisted storyline Billy will be given a chance at redemption.

Depending upon custody battles and or Chloe’s prosecution for said crimes, he may also realize sole parenthood, which would give him a needed opportunity to adjust his life.