The Young and the Restless Spoilers: Chloe Saved Adam Newman From Explosion – Holding Him Prisoner Until Shocking Reveal 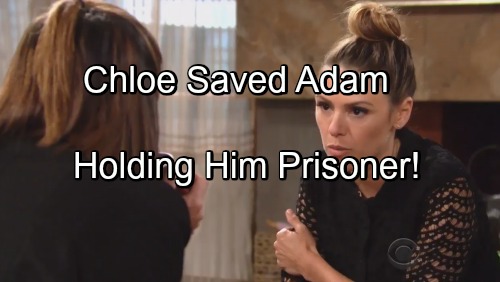 The Young and the Restless (Y&R) spoilers documented Chloe’s (Elizabeth Hendrickson) descent into madness during the past few years. She’s tried to run Adam Newman (Justin Harley) down outside of the courthouse, recently framed him for murder and shot him with a dart gun. Considering those three flash points and other facts, isn’t it possible that she also faked his death in order to indefinitely punish him?

Crawl inside Chloe’s demented mind for a moment. Feel the incessant rage that burns in her gut for the man who she believes killed her daughter Delia (Sophie Pollono). Taste her self-satisfaction in knowing that Adam has been caged like the dog that he is in a secret hideaway, safe from the failed justice system. Why she’s actually become more horrible then the exaggerated view of poor Adam ever was.

It is totally understandable that any parent would be crushed by the death of their child. But even Billy (currently played by Jason Thompson) got over it. He’s too busy smothering Phyllis (Gina Tognoni) with his icky version of love to be focused on Adam. But Chloe, well, she simply couldn’t let it go.

This woman took on Victor, initially neutralized him and then defeated him by making him believe his son died without actually killing Adam Newman – no corpse has been found, just some dodgy DNA, easily planted. How many soapy souls can say they’ve done the same? Yes, Chloe ripped the ruthless mantle away from the Moustache. Wow!

This scenario has yet to be proven, but flows as follows: Chloe removed Adam from the cabin, blew it up and then took him to a remote destination, where he’s currently being held captive. Then, she removed his wedding ring and put it in the drawer that was shown to Y&R fans. Note that Chloe said she wanted to watch Adam die – and she certainly could NOT watch him die in an explosion at which she wasn’t present. No, watching Adam die requires that Chloe remove him from the cabin and store him somewhere for later killing.

As Chloe’s not wealthy, viewers should just know that she happened upon an abandoned location, rather than purchased a villa in the south of France to serve as Adam’s de facto prison. This spot is close enough to Genoa City to enable her to take care of Bella (Cali May Kinder), say hi to the again widowed Chelsea (Melissa Claire Egan) and continue to tease Kevin (Greg Rikaart), all while keeping Adam restrained.

As with most things Chloe, she didn’t fully plan out this evolving scenario. Instead, she’s piecing out her revenge stream of consciousness style. Orchestrating this latest crime based upon whatever whim overcomes her. Esther (Kate Linder) would be appalled if she knew what Katie (the name Chloe spit on and changed a handful of years ago) has done.

But, beyond being a bad daughter and mother, a horrid friend and disloyal wife, she’s also refusing to deal with her mental health issues. And for that Chloe has earned total disrespect because she’s purposefully hurt other people.

Of course, if this theory is false, then Chloe may not have actually saved Adam from the explosion. Instead, she just left him there to die and the explosion happened by chance, or not. Of course we have every reason to think that Adam somehow escaped the blast, assisted or not, and will make a return when TPTB on Y&R decide it’s best, and find a suitable replacement for Justin Hartley.