The Young and the Restless Spoilers: Chloe Uses Kevin For Protection as Adam Newman Evil Secrets Catch Up With Her 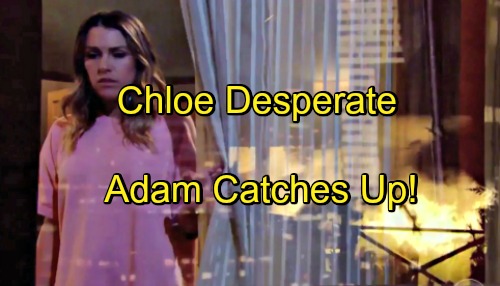 The Young and the Restless (Y&R) spoilers tease that Chloe (Elizabeth Hendrickson) will start to let her guard down with Kevin (Greg Rikaart). Ever since Chloe returned to Genoa City, Kevin has had his eye on her. He’s ready to build a life with Chloe and Bella (Cali May Kinder), but it’s been tough to make it happen.

There are plenty of reasons why Chloe has been dragging her feet. Since they have a complex history together, Kevin reminds Chloe of her painful past. She has some terrible memories that she doesn’t want to be reminded of on a daily basis.

Fortunately, things could change as Chloe and Kevin continue to bond. New memories can move to the forefront and Chloe could find happiness again. That problem is fairly easy to solve, but others could be a little trickier. Chloe is keeping huge secrets from Kevin and they could all blow up in her face.

The Young and the Restless spoilers indicate that Chloe will soon run into trouble. She’ll somehow manage to connect herself to one of her many shady activities. Chloe has been hiding the fact that she helped Victor (Eric Braeden) put Adam Newman (Justin Hartley) away for murder. She also shot Adam with a tranquilizer dart just before his presumed death in the explosion.

Those are some big bombshells that could land Chloe behind bars. Of course, there’s another secret that could cause major drama. Bella’s paternity still hasn’t been revealed, but Billy (Jason Thompson) is the logical candidate.

Y&R might throw in a twist down the road, but they seem to be portraying Billy as the most likely “baby daddy” option.

Chloe could find a way to trip herself up if she’s not careful. It might be significant that Chloe is finally starting to connect with Kevin. Maybe that will come in handy if Chloe needs a helping hand.

Kevin has obviously fallen hard for Chloe. He might be willing to cover for her under the right circumstances.

If Chloe pleads her case and explains that she didn’t actually kill Adam, Kevin might keep her secret. As for the paternity dilemma, Kevin might vow to hide the truth so he could protect the family he’s building.

On the other hand, Kevin could dump Chloe and expose everything. The Young and the Restless characters aren’t exactly consistent when it comes to their morals.

We’ll find out what’s in store sooner or later, but Kevin will be a happy camper for now. Chloe will share an extremely romantic moment with Kevin and he’s sure to be on cloud nine.

Chloe may not be head over heels yet, but Kevin will take what he can get. He’ll just be glad this relationship is going somewhere.

Is this a new beginning? Will Chloe’s deception eventually tear them apart? Time will tell, but it sounds like some great episodes lie ahead. We’ll give you updates as more news comes in. Stay tuned to Y&R and don’t forget to check CDL often for the latest Young and the Restless spoilers, updates and news.