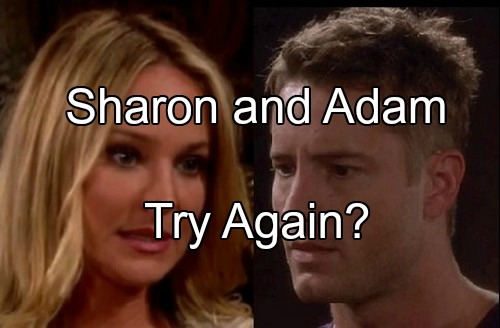 The Young and The Restless (Y&R) spoilers tease that Sharon Newman (Sharon Case) may have doomed her marriage to Dylan McAvoy (Steve Burton) with the Christian-Sully lie. But when all the lies are revealed, is there a chance Sharon might end up with Adam Newman (Justin Hartley)?

Sharon Case hinted at this outcome in a recent interview with Michael Fairman of On Air On Soaps.

Michael Fairman chatted with Sharon Case about the long-running build on the baby Christian storyline and her character’s recent haunting and hallucinations from Sage Newman (Kelly Sullivan). Y&R fans have waited far too long for this all to play out and were devastated when Sage was abruptly killed off allowing Sharon to perpetuate the lie for even longer that Sully is her child.

Of course, The Young and The Restless spoilers indicate that the reveal will come in two stages. The first is that Sully is Christian and that Sage’s baby is alive. The second is that Christian is not Nick Newman’s (Joshua Morrow) son, but Adam’s son instead.

When all of this blows up, Sharon could be left with nothing and no one on her side. 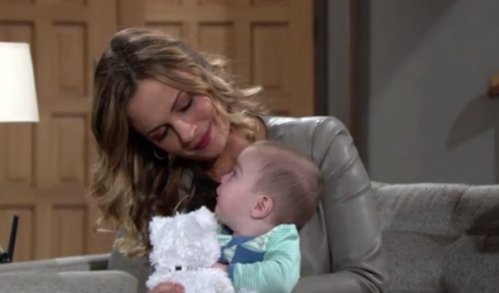 Fairman asked Sharon Case, “Have you thought about what would happen if Sharon found out that Adam is actually Christian’s baby daddy?”

Sharon Case answered, “Sharon and Adam haven’t been together for a long time. I always thought they were a great couple. Maybe this would be the thing that brings them together.”

Case added, “I also thought that Adam and Sharon getting back together would be the greatest twist through all of this. Their love story happened a long time ago, and we are still in the middle of many twists in the story. It hasn’t landed there yet, and we will see if it even does. But what a great way for Sharon and Adam to get back together, and there is this baby!”

Of course, there are still obstacles to a Sharon and Adam reunion, namely that each of them are still married. The Young and The Restless spoilers hint things will change drastically once the truth about Sully comes out. Dylan may not be able to handle losing another child – he’s still childless and has no clue that he’s about to be devastated once again when it comes to having a child of his own. 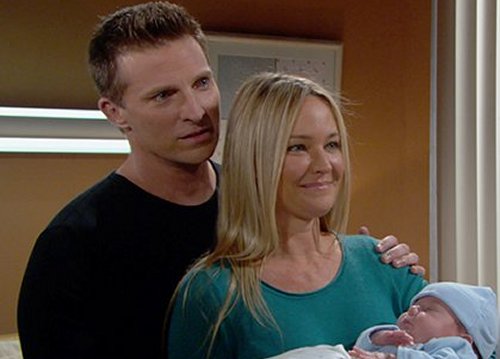 The loss of Sully will hit him hard and could send Dylan reeling. His PTSD has been chill for a long time, but he could lose it over the reveal. Adam told Chelsea Newman (Melissa Egan) about Christian and she understood, but that was with Sage out of the picture and the child deceased.

A living child is another matter. Plus, there will be a two-stage impact with Nick in all of this.

Nick will be thrilled initially to learn that Christian is alive then devastated to lose him all over again to Adam whom he doesn’t like much anyway. Adam should end up with Christian since he’s the only biological parent of the boy.

While it seems like it should work out that Chelsea and Adam raise Christian as their child, things never work out smoothly in soap land.

Plus, Sharon should be coming around a lot to see Christian because she won’t be able to easily let go of the child she’s been raising as her own. Sharon and Adam could bond and Chelsea might feel edged out. From there, Nick and Chelsea might commiserate – or Chelsea and Dylan.

It’s easy to see how this story might migrate from the shocking reveal to splitting up these two marriages.

From there, a gradual reconciliation of Sharon and Adam is entirely feasible. We’ll see how it goes but it certainly sounds like Sharon Case is rooting for another shot at Shadam. What do you think Y&R fans? Would you like to see Sharon and Adam rediscover their love? Or are you happy with the couples as they are? Share your comments below!

Be sure to come back to CDL often for all the latest The Young and The Restless spoilers and news.