‘The Young and the Restless’ Spoilers: Billy and Hilary Plot To Break Up Jack and Phyllis 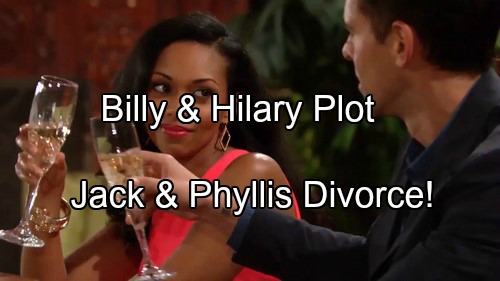 The Young and the Restless (Y&R) spoilers tease that Jack (Peter Bergman) will offer Hilary (Mishael Morgan) some words of encouragement. He knows that Hilary has been through a lot lately. Her relapse has been stressful and now she’s headed for a messy divorce.

Nevertheless, Jack will believe there’s hope for Hilary’s marriage. It appears Jack is the eternal optimist of Y&R. He’s always fighting for couples when the situation is bleak. Billy (Jason Thompson) has certainly heard plenty about how he should reunite with Victoria (Amelia Heinle).

Jack believes his own relationship can get back on track with some hard work and TLC. Likewise, he thinks Hilary and Devon (Bryton James) can find their way back to each other. The Young and the Restless spoilers say Jack will suggest that things will settle down once Hilary is on the road to recovery.

Hilary will maintain that her marriage is over, but she’ll appreciate Jack’s support. She’ll ask Jack to come up to her suite at the athletic club, but he’ll opt for the rooftop deck instead. Jack doesn’t want to cross any dangerous lines. Unfortunately, that’s exactly what Hilary is working toward.

Hilary will pick up on the fact that Jack doesn’t seem entirely happy with Phyllis (Gina Tognoni). He loves her, but something just isn’t right. Of course, Y&R fans know Billy is the problem. Phyllis has declared her love for Billy, but she may not be willing to break that news to her husband.

Hilary will kiss Jack to show that she’s on board with a romance between them. Jack will probably brush off Hilary’s advances and depart. However, Hilary will feel confident that she’ll get what she wants eventually.

Similarly, Billy will believe he’s basically sealed the deal with Phyllis. He’ll think he’s just one step away from a future with the woman he wants. Hilary and Billy will sit next to each other at the club’s bar this week. They’ll talk about how life is looking up.

It’s possible that Billy and Hilary have been in cahoots the whole time. Maybe Billy convinced Hilary to go after Jack in an effort to inspire an affair. That might make it easier for Phyllis to end her marriage. It would definitely alleviate some of Phyllis’ guilt if she thought she wasn’t the only cheater in this union.

On the other hand, it may just be a mutually beneficial coincidence that Hilary and Billy are helping each other out. Perhaps they’ll drop some hints and realize that they have a common goal. Both of them want Jack away from Phyllis.

If they haven’t been working together already, they might start now. At least this could be a “keep up the good work” type of conversation. Regardless, Hilary and Billy will be pretty pleased with themselves. The latest Young and the Restless promo shows the pair toasting as Billy says, “To happy endings…”

Billy might want to hold off on the celebration. No one ever gets a happy ending on a soap! We’ll give you updates on Hilary and Billy’s possible alliance. Stay tuned to Y&R and don’t forget to check CDL often for the latest Young and the Restless spoilers, updates and news.

#Retweet if u r ready for a LONG HOT SUMMER! #yr #lanearmy pic.twitter.com/UtagTIAzq7