‘The Young and the Restless’ Spoilers: Will Nikki Hook Up with Jack Again or Is Victor Her One True Love? 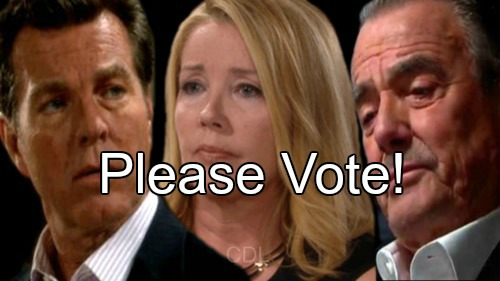 The Young and the Restless (Y&R) spoilers tease that Jack (Peter Bergman) is in for a big shock. We don’t know when the bomb is going to drop, but you can bet that it will. Jack is sure to find out about Phyllis (Gina Tognoni) and Billy’s (Jason Thompson) affair sooner or later. This could mark a pivotal moment for Jack. It may cause his world to completely crumble.

Jack could probably get over it if Phyllis had hooked up with literally anybody else. The fact that it’s Billy may be too much for Jack to take. We’ve been watching Jack and Hilary (Mishael Morgan) grow closer lately, but these two don’t seem very compatible. Deep down, Hilary still loves Devon (Bryton James) anyway.

With that in mind, let’s think about someone else Jack might turn to in the coming months. After the affair blows up and Hilary’s scheme has fizzled, Jack will be in desperate need of some friendship. He’ll likely be tempted to drink after being deceived by his wife and brother.

Could Nikki (Melody Thomas Scott) step up to keep Jack sober? She might provide support just like he’s done for her. They’ve kept each other accountable in the past on Y&R. It’s tough to believe Nikki would just bail on Jack now. Since Nikki is going through a bitter divorce, she could use a little comfort as well.

The Young and the Restless could take Jack and Nikki’s bond in an interesting direction. Perhaps their growing connection would result in a hookup. They might hit the sheets as they wallow in their despair. Then again, maybe it could turn into something more. We could see a full-fledged reunion for these exes. Either way, Victor (Eric Braeden) would not be pleased.

The news of a romance between Jack and Nikki would really send Victor over the edge. Victor would view this as the ultimate act of betrayal. The Newmans and Abbotts have a longstanding feud on The Young and the Restless. Victor and Jack are the leaders of these sparring families. Until Victor’s clan turned against him, Jack and Abbott fam were his top adversaries.

If Nikki hooks up with Victor’s nemesis, it could be a fatal blow for their troubled relationship. Victor could refuse to reunite with his apparent true love. There are some mistakes you just can’t come back from. It might drive Victor into Meredith’s (Alicia Coppola) arms for good.

Then again, Y&R characters often forgive and forget eventually. It might take Victor months or even years to get there, but he could request a clean slate. Victor has had flashbacks of Nikki during his time in prison. In spite of what Victor claims, it’s clear that he still loves Nikki on some level.

Will Nikki and Jack get together in the midst of their messes? Would Victor take Nikki back after that? Does Nikki truly belong with Victor? What romantic updates lie ahead? Vote on Nikki’s future and don’t forget to check CDL often for the latest Young and the Restless spoilers, updates and news.