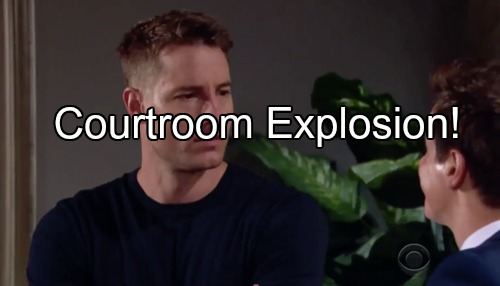 The Young and the Restless (Y&R) spoilers tease that Adam (Justin Hartley) will soon be in a desperate fight for his freedom. His trial is just days away and the evidence against him continues to mount. However, some security footage will provide a solid lead.

Michael (Christian LeBlanc) and Adam will hope to find Victor’s accomplice before this legal battle kicks off. Her testimony could lead to a huge win.

Of course, Victor’s plot has been flawless so far. It’s tough to believe he’d be sloppy enough to let his partner get caught and out them on the stand. There’s a good chance Adam will find nothing but a dead end.

That means Adam will likely rely on his original plan, which is incredibly risky. Ian (Ray Wise) is anything but trustworthy.

Ian will show up to court looking spiffy in his suit. Will Ian come through for Adam when he needs him the most? We’ll have to wait and see, but Ian’s statement may not even matter once Victor takes his turn.

The Young and the Restless spoilers indicate that Victor is prepared to make some bold declarations.

Beforehand, Victor will ask Meredith (Alicia Coppola) to stay out of the courtroom. He’ll suggest that he doesn’t want Meredith to get involved in his family’s mess. In reality, Victor just wants to preserve Meredith’s view of him.

He intends on making some startling admissions that he doesn’t want Meredith to hear.

Nevertheless, Y&R viewers know Meredith isn’t capable of avoiding her prison lover. She’ll take a seat by Nikki (Melody Thomas Scott) as the proceedings begin. That should be a little awkward. We’ll have Victor’s former flame and his hot fling right next to each other.

Still, these women will be somewhat connected by their shared love for this complex man.

Later, Victor will deliver his testimony, but it’s not clear what he intends to spill. Victor may know something that could without a doubt put Adam behind bars. Then again, Victor is a mysterious man.

He may pull a fast one and save Adam at the last minute. If so, it probably wouldn’t be out of love.

Instead, it would be a calculated power play. Adam might end up under Victor’s thumb once again. Whatever the case, you can bet that Victor will ultimately give himself the advantage with his testimony. The payoff may be immediate or delayed, but there’s sure to be one.

The Young and the Restless spoilers say Victor will deliver some jaw-dropping news on Adam’s judgment day. Will this announcement help or hurt Adam? Will Victor expose Ian and Adam’s escape scheme or does something even more shocking await?

It’s anyone’s guess with Victor. He works in unpredictable ways.

Y&R fans will be glued to their screens as Adam learns what the future holds. Most of us will be rooting for Adam to get off the hook, but that doesn’t necessarily mean we’ll get our wish. We’ll give you updates on Victor’s bomb.

Stay tuned and don’t forget to check CDL often for the latest Young and the Restless spoilers, updates and news.