‘The Young and the Restless’ Spoilers: Week of June 27 to July 1 – Bar Brawl, Twisted Romance and Desperate Search for Answers 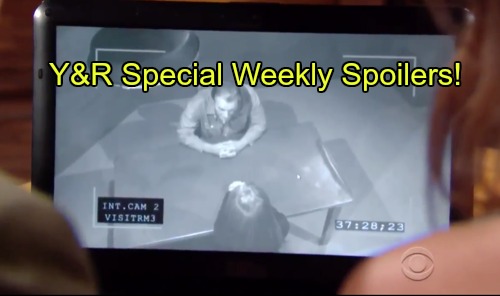 The Young and the Restless (Y&R) spoilers for the week of June 27 to July 1 tease that we’ll see major fireworks on the CBS soap. For starters, Phyllis (Gina Tognoni) will do her best to strengthen her bond with Jack (Peter Bergman). She’s been distracted by Billy (Jason Thompson) lately and that’s left Jack a little bummed out.

Phyllis will even forget Jack’s birthday, but she’ll come up with a cover story to save the moment. Y&R spoilers say Phyllis will ask Jack to join her at the Abbott cabin. Phyllis will pretend she had this romantic getaway planned all along.

Of course, the one thing Phyllis won’t count on is an appearance by Billy. After Jack heads back to Genoa City for Adam’s (Justin Hartley) trial, Billy will seek out his lover. We all know what happens when these two are alone.

This week’s Young and the Restless promo shows Billy and Phyllis indulging in sex as usual.

Meanwhile, Jack will also grow closer to someone besides his spouse. Hilary will be grateful to have Jack’s support in the midst of her current crisis. She’ll touch Jack’s hand and suggest that he’s a kind, generous man. These pals cold easily become something more, especially if Phyllis continues to remain distant.

Once the “Philly” affair blows up, Jack may feel free to do whatever he wants.

It seems Hilary will end up in the hospital as her relapse symptoms worsen. It’s not clear if Devon (Bryton James) will figure out what’s going on or not, but it won’t matter. Hilary will maintain that their marriage is over. She’ll want Devon to accept it and move on.

Other Young and the Restless spoilers reveal that Adam could get a lucky break. Michael (Christian LeBlanc) will announce that they have a new lead on the person who helped with Victor (Eric Braeden). Kevin (Greg Rikaart) and Natalie (Mara McCaffray) will obtain security footage from the state pen in Monday’s episode.

They’ll notice that Victor had a visitor who looked a lot like Natalie.

Natalie will swear that she’s innocent and we’re inclined to believe her. There’s a good chance Chloe (Elizabeth Hendrickson) is actually Victor’s accomplice. Unfortunately, Adam and Michael won’t have any idea who the woman in the footage is.

They may face difficulty in trying to track her down.

Still, Michael’s updates will provide a glimmer of hope for Adam in the days before his trial. Adam will want to find Victor’s secret partner and get her to testify. Since Y&R spoilers say Adam will get crushing news this week, that might mean his mission is destined to fail.

Elsewhere, Travis (Michael Roark) will have a run-in with Billy. This showdown will get heated when Travis makes a bold declaration. He’ll state that Victoria (Amelia Heinle) is on the verge of having something real again and Billy can’t handle it. Billy will grab Travis by the shirt and shove him into the bar.

Later, Victoria will try to explain her ex’s behavior. She’ll say she knows why Billy got up in Travis’ face like that. Victoria will think Billy can’t stand that she’s falling in love again. Ooooo…Victoria is dropping the L-word. This is getting serious!

Stay tuned to see where this leads and don’t forget to check CDL often for the latest Young and the Restless spoilers, updates and news.

Plenty of fireworks happening next week on #YR pic.twitter.com/LdMiGgkHct