‘The Young and the Restless’ Spoilers: Ian Hides at Cabin, Ties Up Phyllis and Nikki – Victor Survives Shooting, Faces Kids 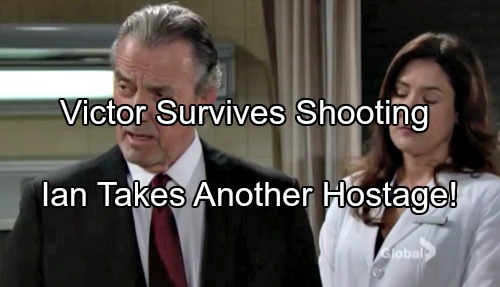 The Young and the Restless (Y&R) spoilers tease that the courthouse chaos will continue as Victor’s (Eric Braeden) life hangs in the balance. Nick (Joshua Morrow) will take Jack’s (Peter Bergman) coat and frantically try to stop his father from bleeding out. It’s clear that this is a dire situation.

Paul (Doug Davidson) will become frustrated by the ambulance’s delay. He’ll realize that Victor needs to get to the hospital pronto. Luckily, the paramedics will eventually arrive and rush Victor in for treatment. He may need emergency surgery right away.

Of course, Y&R fans know that Victor is practically invincible. It would take a lot more than a bullet to send this Newman to the great beyond. The Young and the Restless spoilers say Victor’s doctors will patch him up and he’ll be on the road to recovery on next week’s episodes.

Meanwhile, it looks like Victor’s children won’t have a ton of sympathy for their old man. Despite Victor’s claims on the stand, there’ll be doubts about his motives. It took some convincing, but even Nick started to suspect that The Moustache was framing Adam (Justin Hartley).

Plus, we have the matter of the oil leaks to consider. Since Victor was spotted on the security tapes with an accomplice (or two!), Nick and Victoria (Amelia Heinle) think they know what was going down. They feel confident that Victor is to blame for Newman’s misfortune and they’ll call Victor out for his revenge plot.

In fact, Victoria and Nick will confront Victor as he recovers. They’ll waste no time in getting to the bottom of this. Victor nearly lost his life, but it seems his kids couldn’t care less. Perhaps Victor has just pushed them too far.

They might have let Victor bleed to death if they didn’t want answers so much!

The Young and the Restless spoilers say Nick and Victoria will press Victor to confess that he wants vengeance. It’s not clear why they really need confirmation. Victor warned that they would pay for their betrayal. They shouldn’t be surprised that The Moustache is following through on his word.

However, maybe Victor had other ideas for retribution in mind. Someone else could be behind the oil spills. After all, the company still bears Victor’s name. Sabotaging Victoria is one thing, but running everything you’ve built into the ground is quite another.

Nevertheless, Victor needs to at least understand why his children would accuse him. He doesn’t typically have their best interests at heart. It appears the conflict will persist for this complicated family. Their grudges may not let up anytime soon.

At the cabin, Phyllis (Gina Tognoni) will confess her love for Billy (Jason Thompson) and send him away so she can be alone with her thoughts. Unfortunately, Phyllis’ solitude will quickly be interrupted by a gun-toting Ian Ward (Ray Wise). He’ll burst in with Nikki (Melody Thomas Scott) and tie both women up.

Phyllis will be furious over all of this. She’s already faced her fair share of trouble thanks to Ian (aka Fred). Nikki and Phyllis will try to stay calm as they wait for help to arrive. If no one comes, they may be forced to come up with a getaway plan. That could mean bad news for Ian.

Will Phyllis and Nikki be able to outwit the master? We’ll give you updates on everything that unfolds. Stay tuned to Y&R and don’t forget to check CDL often for the latest Young and the Restless spoilers, updates and news.