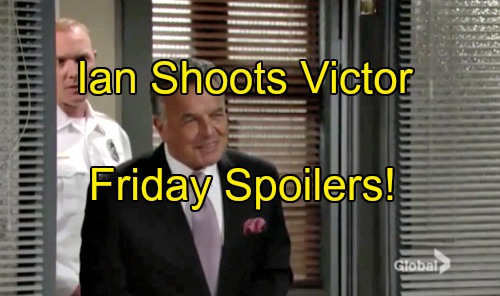 The Young and the Restless (Y&R) spoilers for Friday, July 1, tease that we’ll see an action-packed day on the CBS soap. This is one episode that fans won’t want to miss! As Victor (Eric Braeden) prepares for Adam’s (Justin Hartley) trial, he’ll inform Meredith (Alicia Coppola) that he doesn’t want her there.

Meredith will be somewhat suspicious of what Victor might be hiding.

Ian Ward (Ray Wise) will arrive to let Victor know that they both want justice. He’ll flash a mischievous smile and head on his way. Once court is in session, Dylan (Steve Burton) will take the stand to explain the evidence against Adam. Nick (Joshua Morrow) will also give his testimony.

He’ll admit that Sage’s (Kelly Sullivan) journal points to Adam’s guilt, but he’ll add that Victor could’ve had it forged.

The Young and the Restless spoilers say Ian will stick to the plan when he gives his statement. He’ll accuse Victor of incriminating himself by bragging about the setup. Victor will be called to the stand next.

He’ll insist he wouldn’t frame the son he loves. Victor will contend that Ian might be person who’s responsible. He’ll confidently state that Adam isn’t a murderer.

As Ian is led out, he’ll discover that Adam’s escape plot was a sham. Ian will take matters into his own hands by wrestling a gun away from the bailiff and pointing it toward Nikki (Melody Thomas Scott). When Victor emerges, Y&R spoilers say Ian will take aim and fire. Chaos will ensue as everyone realizes that Victor has been shot!

Nick will do his best to stop the bleeding, but he’ll face difficulty. Jack (Peter Bergman) will pitch in by providing his jacket. Paul (Doug Davidson) will wonder where the ambulance is. They could lose Victor if the paramedics don’t show up soon.

Meanwhile, Ian will make his getaway with Nikki in tow. We’re now dealing with a hostage situation. This could lead to more bad news.

Other Young and the Restless spoilers reveal that Mariah (Camryn Grimes) will determine that Sharon (Sharon Case) is in bad shape. At home, Mariah will lash out at Sharon for stopping her medications. She’ll confront Sharon with a pill bottle and demand some answers.

Sharon will say it was the only way to prevent her horrible visions of Sage (Kelly Sullivan). Unfortunately, we know Sharon’s plan didn’t work out for her. In fact, Sharon will have another hallucination as Mariah lectures her on the danger.

Mariah will feel like this has gone too far. It’ time for Sharon to take control. However, Sharon will be distracted by Sage and her cruel words. Sage will move in front of Mariah and suggest that this so typical of Sharon. She’ll argue that Sharon will do anything to keep a man.

Sharon will grab a bookend and attempt to strike Sage. Since Sage is just a delusion, Sharon will hit Mariah instead. Once Mariah is out cold, Sage will continue to taunt Sharon. She’ll insist that Sharon always hurts the people she loves.

Kevin (Greg Rikaart) will arrive to find Sharon tearfully apologizing to Mariah’s unconscious body. Sharon will panic as she claims she wasn’t trying to harm Mariah. She only wanted to get rid of “her.” Kevin will be confused by Sharon’s comments. He’ll press Sharon to explain.

Will Kevin convince Sharon to tell him everything? Will Mariah wake up and help them sort all of this out? This storyline is really heating up! We’ll give you updates on the twists and turns ahead.