‘The Young and the Restless’ Spoilers: Ian’s Escape Goes Badly – Kidnaps Nikki, Holds Her Hostage with Phyllis at Cabin 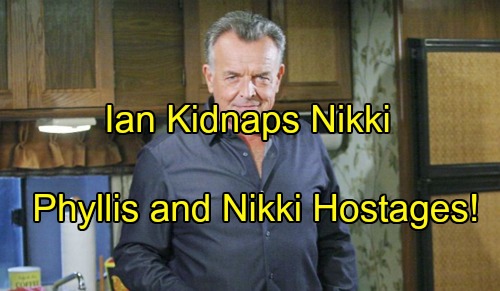 The Young and the Restless (Y&R) spoilers tease that Ian (Ray Wise) will move forward with his escape plan. He intends on gaining his freedom with or without Adam’s (Justin Hartley) help. Ian feels like he’s above the life he’s living. He’s ready to stir up trouble outside of the state pen and he’ll succeed right off the bat.

He’ll kidnap her and hope that she’ll help him gain control of the situation. Ian will be in desperate need of some leverage.

These may not be the best circumstances, but Ian won’t let this chance slip past him. He’ll refuse to give up and go back to prison. The Young and the Restless spoilers say Ian will travel to the cabin with Nikki for the second phase of his new scheme.

Of course, we know Phyllis (Gina Tognoni) is currently spending some time there. She’ll be stunned when Ian shows up with Nikki and a gun. Ian will mull over what his next move should be. He’ll have two hostages, which means he might be able to make some demands.

While Ian tries to wrap his head around everything, Phyllis and Nikki will band together. They’ll shout that Ian isn’t going to get away with this. Ian will keep his cool under pressure. He already had a lot riding on this escape attempt.

Once Phyllis and Nikki are in the mix, the stakes will be raised.

The Young and the Restless spoilers reveal that Ian will find some rope to tie up his captives. In the meantime, Genoa City will be in panic mode. Ian’s plot will cause total chaos for members of the Newman clan. Everyone will be frantic as they work to find Nikki and bring her home.

Ian is an extremely dangerous man and he’s capable of anything. From Paragon to the fire at Newman Enterprises, Ian will go to great lengths to get what he wants. He would definitely be willing to shoot Nikki or Phyllis if need be.

Phyllis and Ian (aka Fred) had a special thing going at one time. She might want to use that to her advantage. Ian isn’t fooled easily, but it might be worth a shot. If Phyllis can feign friendship or romance, maybe it will distract Ian. Nikki and Phyllis could gain the upper hand.

If not, someone will obviously come looking for Phyllis when she doesn’t return to GC. Who might arrive to save the day? We’ll have to wait and see, but this is certainly an exciting storyline. Stick with the CBS soap for updates on the mayhem that’s about to unfold.

So Y&R fans, what do you think about the news that Ian will kidnap Nikki? What about Phyllis’ involvement? How will these ladies get out of such a perilous jam?

Will Ian be apprehended or will he manage to disappear? Voice your opinion in the comments below and don’t forget to check CDL often for the latest Young and the Restless spoilers, updates and news.