The Young and the Restless Spoilers: Did Victor Newman Tamper With Bella’s DNA Test? 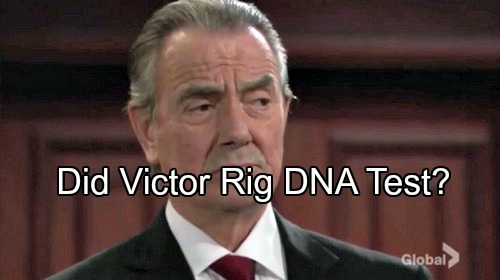 Viewers who follow The Young and the Restless (Y&R) spoilers know that Victor Newman’s (Eric Braeden) power envelopes Genoa City. And, currently he’s manipulating a dangerous game with Chloe (Elizabeth Hendrickson), who unexpectedly decided to betray him. Would The Moustache be so bold and opt to tamper with Bella’s (Cali May Kinder) paternity test results in order to gain the upper hand?

Chloe recently returned to Wisconsin because she was recruited by Victor to help with his dysfunctional family plan. He asked her to help him frame Adam (Justin Hartley) for the invented murder of Constance Bingham (Sally Kellerman) in order to teach his son a lesson. Still unable to truly cope with the loss of Delia (Sophie Pollono), Chloe agreed to be Victor’s accomplice.

As fans of The Young and the Restless know, Victor always has some type of hidden agenda. So, after allowing Chloe to do his bidding, Victor stated in court that he didn’t think Adam was a killer. Chloe believed that public statement was proof that Victor had used her and of course she was correct. She subsequently didn’t follow through with his directions to turn over Sage’s (Kelly Sullivan) real journal pages to the police, which would have served to clear Adam’s name.

After urging Chloe to follow through on what she’d agreed to do, Victor reminded his forced partner that he could take Bella from her. Then, he broke into her motel room in an ill-fated attempt to find the aforementioned journal pages. While there he warned Chloe again to do what he had asked or face the consequences. But She certainly isn’t the type of person who will back down.

Kevin (Greg Rikaart) naturally believes that Bella’s age might make him her father. He demanded a paternity test and Chloe quickly relented and agreed to have one done. Considering the many odd genetic results that have been revealed on The Young and the Restless in the past it’s surely possible that Victor might have interfered with the latest scientific piece of so-called proof. If The Moustache meddled with Bella’s paternity test what else might he do to gain control over Chloe?

CDL is a leading source for everything linked to The Young and the Restless. Check back regularly for all your Y&R spoilers and news!