BY Heather Hughes on August 1, 2016 | Comments: one comment
Related : Soap Opera, Spoiler, Television, The Young and the Restless 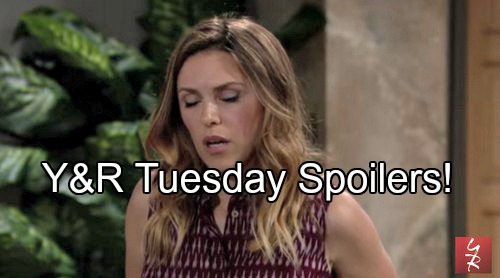 The Young and the Restless (Y&R) spoilers for Tuesday, August 2, tease that Chelsea (Melissa Claire Egan) will hope to get an idea of Chloe’s (Elizabeth Hendrickson) mindset. After some gentle prodding, Chloe will admit that she used to want Adam (Justin Hartley) dead because of what he did to Delia (Sophie Pollono). Chloe will claim that she now understands it was simply an accident.

Chelsea will suggest that she’s glad Chloe gave up on her vengeance plans. They’ll share a hug as they finish their chat. Meanwhile, Kevin (Greg Rikaart) will seem somewhat excited over the possibility that he could be a dad. He’ll thank Mariah (Camryn Grimes) for her support. When Natalie (Mara McCaffray) arrives, she’ll hear the news that Kevin could be Bella’s (Cali May Kinder) father.

After Kevin steps away, Natalie will talk to Mariah about the situation. She won’t like the fact that Kevin could be linked to Chloe forever. Mariah will contend that Kevin will remain tied to Chloe anyway. He’ll always remember his love for her. Later, Natalie will ask Kevin if he still wants to be with Chloe. He’ll hint that their romance is in the past.

At the athletic club, Abby (Melissa Ordway) and Stitch (Sean Carrigan) will discuss what’s happening with Max (Jared Breeze). They’ll agree that things aren’t perfect, but they’ll hope for a better future. Abby will meet up with Ashley later and declare that Stitch is ready for another baby. It sounds like Abby is still trying to rush this process along.

Ashley will also face lingering problems from the medical project. She’ll tell Devon (Bryton James) and Hilary (Mishael Morgan) that they’re all being sued for fraud. The updates will concern Devon. He’ll think settling would be in their best interest. Hilary will insist that they need to fight this. She’ll want to clear everyone’s name and move forward.

Ashley will blast Hilary for letting her ego interfere. She’ll urge Hilary to listen to Devon. They need to take care of it before the media runs with the story. Devon will try to get Hilary on his side, but she’ll maintain that her view is better.

Later, Mariah will drop by the penthouse and mention the paternity test to Chloe. After Chelsea offers some paid vacation days, Mariah will exit. Chelsea will ask about Bella’s father and Chloe will assure her that he’s a guy in California.

A phone call will come in about the test, so Chloe will head off to be with Kevin. They’ll take a look at the DNA results together. Y&R spoilers reveal that this paternity mystery will be a lengthy storyline. It sounds like some good twists and turns are headed our way.

In the meantime, Nick (Joshua Morrow) will try to solve another mystery. The Young and the Restless spoilers say Nick will talk to Dylan (Steve Burton) about Sage’s (Kelly Sullivan) diary pages. He’ll wonder if the real entries are still out there. Dylan will admit that he believes that’s true.

They’ll talk about what Adam is going through, but Dylan will indicate that the case has been closed. Sharon (Sharon Case) will come home with Sully and Faith (Alyvia Alyn Lind). When the topic of a family trip comes up, Dylan will suggest camping.

Nick will get a laugh as he imagines Sharon the great outdoors. Once Nick leaves, Dylan will confess that he’s secretly working on Adam’s case. He just can’t drop the investigation. They’ll revisit the camping suggestion and Sharon will cave in. When Mariah shows up, Sharon will talk her into joining them.

In the woods, Faith and Dylan will excitedly prepare to pitch their tents. Mariah and Sharon will look less than thrilled. Back at the penthouse, Nick will drop by to get some answers from Chelsea. He’ll try to determine what kind of plot Chelsea and Adam have cooked up.

Chelsea promised Adam she would keep quiet about their Chloe mission. Will Chelsea keep her word? Time will tell, but Nick will remain suspicious either way. Y&R spoilers state that Nick will turn to Victor (Eric Braeden) in Wednesday’s episode. Some accomplice questions may come up. Stay tuned to see if Nick can figure out what’s going on.