The Young and the Restless Spoilers: Is Victor Using Nikki To Beat His Prison Sentence? 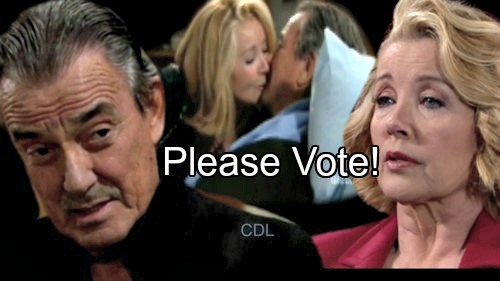 The Young and the Restless (Y&R) spoilers ask if Victor is using Nikki to beat his prison sentence. Would The Moustache use his dear wife as a get out of jail free card? Given Y&R history of past manipulations on the part of the Newman patriarch we ask readers to read the post below and then vote in our CDL poll.

The world knows that Victor Newman (Eric Braeden) is ruthless. And, it has seen that love has often blinded Nikki (Melody Thomas Scott) on ‘The Young and the Restless’. It remains possible that Victor hasn’t completely forgiven Nikki for her perceived transgressions. So, could he be using the appearance of reconciliation with his wife as part of a plan to be released from prison?

All who have chosen to ride the ‘Niktor’ roller coaster through the years can’t instantly reject the question shown above. Yes, Victor does love his wife, in his own way. But, he could easily be seeking some type of recompense through her instead of true reunion.

Victor has consistently stated that Nikki betrayed him, along with the other members of his family, since he was sentenced to prison. So, it stands to reason that he believes all who supposedly wronged him have to pay, or be used in some way, to facilitate restitution on ‘The Young and the Restless’.

Poor Nikki went to see Victor last week in his hospital room. Ashamed by doubting his character, she expressed gratitude for having been rescued. She also offered admiration for his not having killed Ian Ward (Ray Wise) when given an opportunity to do so. It was at that point Nikki chose to believe that the man she’s loved for decades was alive again.

Victor replied to his wife’s offer to remain married with tears and projected truth. She was his soul mate and they could never be separated, despite all that had transpired. Nikki then immediately took her ‘Free Victor’ campaign to their blended family, hoping to encourage everyone to work on behalf of this great man in order to earn his early release from Walworth.

Viewers know that Victor later revealed to Adam (Justin Hartley), who he’s arguably tortured more than Nikki since his adult arrival on ‘The Young and the Restless’, that he’ll soon be freed from prison. While that scheme is surely linked to logical interests, Victor isn’t likely to dissuade Nikki from her emotional quest. He knows that all votes count in a close election, while fans wonder what he’s really thinking.

What do fans of ‘The Young and the Restless’ spoilers think? Is Victor using Nikki to get out of jail? Vote in our poll below and come back to CDL for tons more Y&R spoilers and news!