‘The Young and the Restless’ Spoilers: Phyllis Drops a Bomb on Jack – Hilary’s Setback – Travis and Victoria Make Big Plans 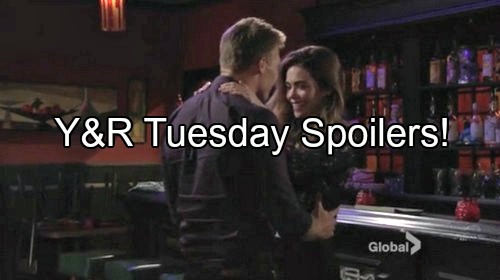 The Young and the Restless (Y&R) spoilers for Tuesday, July 12, tease that Billy (Jason Thompson) will be irritated when he gets updates on Jill’s (Jess Walton) plans. Cane (Daniel Goddard) will state that Jill wants to repaint the mansion. It seems it’s just not up to Katherine’s (Jeanne Cooper) standards.

Billy will head over to Phyllis’ (Gina Tognoni) office and ask if she’s made her choice. Phyllis will hint that she’s not ready to make a decision yet. Billy will argue that all of this waiting isn’t solving their problems. The situation isn’t perfect and it never will be. Billy will think Phyllis needs to tell Jack (Peter Bergman) the truth so they can move forward together.

Later, Billy will return home to find the Cane talking to the painter that Jill hired. He’ll lash out and Cane will wonder if there’s something else on his mind. On the athletic club’s rooftop, Summer (Hunter King) will catch Luca (Miles Gaston Villanueva) speaking with a reporter about the crisis at Newman Enterprises. He’ll make an excuse and insist that he’s trustworthy.

In Victoria’s (Amelia Heinle) office, she’ll bicker with Travis (Michael Roark) about her father. Since the family is pushing for Victor’s (Eric Braeden) release, Victoria has joined the fight. However, Travis won’t be certain that’s the right move. Victor could be hoping to completely destroy Victoria once he’s out of prison.

Travis will exit just before Luca and Summer come in. They’ll argue with Victoria about how to deal with the latest business issues. Victoria will contend that she’s the one in charge. She’ll leave to visit Travis at Hank’s bar. Victoria will admit that she’s been acting rather Victor-ish lately.

After they get frisky on the pool table, Travis will urge Victoria to leave everything behind. He’ll think they should run away and begin a new life together. Based on Wednesday’s Y&R preview video, it appears Victoria will initially accept the offer. Of course, we all know this dream isn’t going to work out.

Elsewhere, Devon (Bryton James) will reach out to Hilary (Mishael Morgan) again. She’ll shut him down and maintain that he’s only trying to protect his wallet. A disheartened Devon will meet up with Neil (Kristoff St. John) to discuss his dilemma. He’ll confess that he still feels drawn to Hilary.

Devon will wonder if the drugs have taken Hilary down this vindictive path. Neil will believe that Devon and Hilary still have a chance to make it work. Meanwhile, Dr. Neville (Michael E. Knight) and Ashley (Eileen Davidson) will give Jack some good news about Hilary’s condition. He’ll study Hilary’s lab report, which will show that she’s doing fine.

A short time later, Jack will find Hilary grimacing in her bed. She’ll claim she feels worse than ever, but Jack won’t buy it. He’ll remind Hilary that they’ll never be anything more than colleagues.

Once Jack exits, Hilary will run into Devon downstairs. She’ll keel over and Devon will catch her. At the hospital, Devon and Neil will push for answers.

Dr. Neville and Ashley will want to get to the bottom of this, too. They’ll all be informed that Hilary’s condition is rapidly declining. “The Young and the Restless” viewers will be curious to see how Jack will respond to this sudden setback.

In the meantime, Jack will pay Phyllis a visit in her office. He’ll propose a lunch date, but Phyllis will have more important matters to address. She’ll nervously explain that she has something to tell Jack. It sounds like a big revelation is on the way. Stay tuned to see how much Phyllis will admit to.