The Young and the Restless Spoilers: Jack Gears Up for Revenge – Channels Marco – Billy, Phyllis and Jill Must Pay 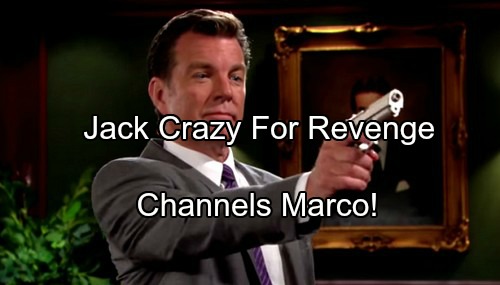 The Young and the Restless (Y&R) spoilers tease that Jack (Peter Bergman) will be a changed man in the coming weeks. Ever since the Marco (Peter Bergman) ordeal, Jack has gone soft. It feels like he’s always willing to give people a pass for their mistakes.

Not this time! Phyllis (Gina Tognoni) and Billy (Jason Thompson) have made things crystal clear for Jack. No one can be trusted. Billy and Phyllis’ betrayal is seemingly unforgivable. Jack is hurt, but he’ll choose to ignore that for now. Anger is the main emotion he’ll be dealing with as the affair fallout continues.

The Young and the Restless spoilers suggest that Jack will toss aside his nice guy persona and channel his doppelganger Marco! Jack could end up being just as vengeful as Victor (Eric Braeden) pretty soon. In fact, there’s a chance that Victor could help Jack out with his revenge mission.

After all, Victor overheard Jack making an appointment with a marriage counselor. He already knows something’s up, but the whole town will know the dirty details before long since Jack goes public with the shocking news. Juicy news like this tends to travel fast in Genoa City – even faster once Jack gets the media involved.

Jack and Victor are never going to be besties, but they could work together if they have a common goal in mind. Victor hates “Billy Boy” and he’s not too fond of Phyllis either. He probably wouldn’t have any qualms about going after both of them.

Then again, Jack might choose to handle this on his own. Phyllis and Billy’s actions have torn him apart. Jack needs an outlet for all of his rage. The Young and the Restless spoilers say Jack will come up with a plot to make the cheaters pay.

Of course, Billy and Phyllis aren’t the only ones who deserve a good dose of vengeance. Jack will also want Jill (Jess Walton) to suffer for keeping the secret. Y&R spoilers indicate that Jack will rip into Jill for covering up the affair. He won’t like that Jill was trying to manipulate his marriage just to satisfy her goals as an overbearing mother.

Jill will insist that she was only doing what she thought was best for everyone. She didn’t want Jack to get his heart broken. Unfortunately, Jack won’t see the situation from Jill’s perspective. He’ll believe Jill’s lies just piled on unnecessary drama and prolonged the inevitable. Jack will think he’s been a fool for not seeing warning signs.

The Young and the Restless spoilers hint that Jack will make a bold declaration. He might point out that he’s done being a peacekeeper. When there’s a problem, Jack tends to step up and fix it. Now he’s about to cause issues for those who have damaged him deeply.

Jack will urge Jill to be ready. He’s putting her on his revenge list right along with Billy and Phyllis. How far will Jack go for retribution? We’ll give you updates as details emerges. Stay tuned to Y&R and don’t forget to check CDL often for the latest Young and the Restless spoilers, updates and news.