The Young and the Restless Spoilers: Jack Shocked by Philly Reveal – Risk of Phyllis and Billy Exposure Deepens 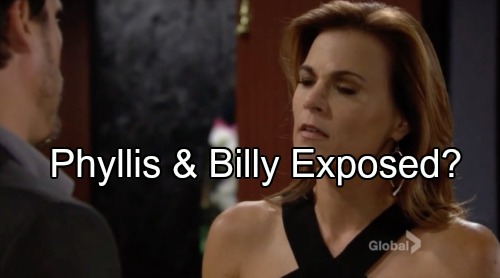 The Young and the Restless (Y&R) Spoilers delved deep into ‘Philly’, who are otherwise known as Phyllis (Gina Tognoni) and Billy (Jason Thompson). As devoted fans know, the writers didn’t create this controversial arc to merely let it go. Questions about how, why and when ‘Philly’ will be exposed remain as hot as ever.

Jill’s (Jess Walton) plan to push Billy and Victoria (Amelia Heinle) together made good mothering sense. Both characters were previously married and have young children. However, along with the possibility of ‘Villy’ reforming came Billy’s close proximity to Phyllis, or vice versa depending upon one’s preference, within the same Jabot building.

Jack (Peter Bergman) remains oblivious to ‘Philly’, which is why he agreed to rent space to Brash and Sassy when asked. However, many fans of The Young and the Restless spoilers’ might be questioning the believability of his character’s seeming cluelessness. But, aren’t those soap devotees aware of individuals who have been, or are, oblivious to their spouse’s behavior in real life? So, on second thought, it is reasonable to think that Jack wouldn’t have discovered this terrible truth, yet.

Adding Vickie to the mix increases odds that she, or another character, will overhear ‘Philly’ discussing something that relates to their connection, or will catch them in a compromising position. If either instance doesn’t happen, simply having ‘Philly’ in the same physical space increases the likelihood that more people will become suspicious of their true connection. And, eventually, this unseemly matter has to be exposed, or forcibly revealed, based on Y&R’s history.

A ‘Villy’ revival does offer potential, as that formerly electric power couple could be observed through Thompson’s and Heinle’s interpretation. While Heinle’s work with Billy Miller will likely always be considered the best, Thompson’s brooding version of Billy is gaining traction. And, these actors have the chops to collaboratively create something fresh.

Drama will surely increase when even one more character (beyond Jill) learns that Phyllis and Billy were recently involved. So, ‘Philly’ might be finished. But, the connection that unexpected pairing had will likely be revealed and resulting consequences will shake Genoa City.