‘The Young and the Restless’ Spoilers: Jack Tipped Off to Phyllis’ Lies, Fears Cheating – Responds With Hot Hilary Fling 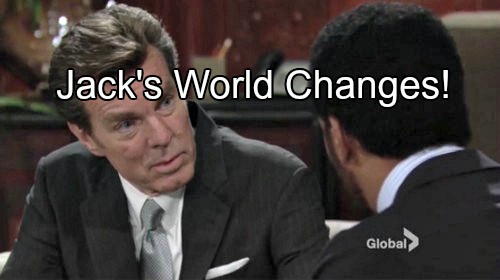 The Young and the Restless (Y&R) spoilers tease that on Friday’s episode, July 15, suspicions will start to swirl for Jack (Peter Bergman). Phyllis (Gina Tognoni) told her husband that she needed some time to herself. She admitted that she had grown increasingly stressed over the last few months. Phyllis felt like a break from their marriage was for the best.

Jack blamed Victor (Eric Braeden) for sending Phyllis down this tense path, but he’ll soon realize there’s much more to the story. The Young and the Restless spoilers say Jack will learn some stunning info that points to Phyllis’ lies. He’ll find out that Phyllis never used the company jet, which means she didn’t go out of town for a Passkey conference.

Naturally, Jack will wonder about that lost weekend. Phyllis was deceiving Jack and he’ll have a pretty good idea of why. Y&R spoilers indicate that Jack will talk to Ashley (Eileen Davidson) about the problems in his marriage.

When Jack mentions the plane issue, Ashley will kid around about the notion of Phyllis cheating. Jack will reply that he really thinks that’s the case. He’ll confess that he’s beginning to believe Phyllis might be having an affair.

Ashley will be hesitant to believe Jack’s news, but she may think he’s on the right track once she hears the details. Phyllis has been pushing Jack away and that’s a bad sign. After they discuss the matter, Ashley will urge Jack to stay tight-lipped. Moments later, Phyllis will arrive and ask what’s going on.

Perhaps Phyllis will hear her name and become curious about why they’re clamming up. Nevertheless, Jack will likely keep his suspicions to himself for now. Maybe Jack will decide to do a little digging. He might want to check out his theory before he starts hurling accusations around.

Jack won’t want to hurt Phyllis by pointing out his lack of trust. Still, his doubts will nag at him and that could make him determined to learn the truth. Will Jack try to follow Phyllis or at least have someone tail her? We’ll have to wait and see, but that plan could lead to big trouble for both Phyllis and Billy (Jason Thompson).

In the meantime, Jack will discover that he owes Hilary (Mishael Morgan) an apology. He recently suggested that Hilary was trying to con him by pretending she was sick. In reality, Hilary is worse than ever. Neil (Kristoff St. John) will give Jack updates on Hilary’s condition, which is rapidly deteriorating.

Jack will feel guilty for making things even more difficult on Hilary during this health crisis. He’ll want to step up and be a real friend. This could bring the pair much closer. After Hilary recovers, she could easily persuade Jack to have a hot fling with her. That’s especially true since Jack suspects Phyllis is enjoying one of her own.