The Young and the Restless Spoilers: Justin Hartley Interview – Back To Y&R In Recurring Role Or Michael Muhney Full Time? 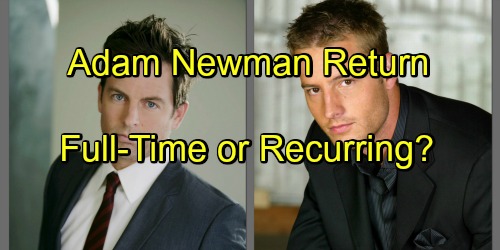 The Young and the Restless (Y&R) spoilers tease that fans could see Justin Hartley back in a recurring role as Adam Newman. Justin recently revealed he might consider returning to Y&R even if it were just an occasional visit. Does that mean that no Adam Newman recast is planned?

‘This is Us,’ Justin Hartley’s new drama, is a huge hit, as was expected. ‘Entertainment Weekly’ recently celebrated the success of ‘This is Us’ and featured the cast on the magazine’s cover. That doesn’t mean that Justin Hartley actor couldn’t show up in Genoa City in a recurring role for a few episodes here and there while filming of the NBC drama is on hiatus.

While on a break from filming the Amazon original series ‘Good Girls Revolt’ Michael Graziadei returned for a brief time to Genoa City for Summer Newman’s wedding to Luca Santori [Miles Gaston Villanueva]. While in town Daniel paid a visit to mom Phyllis Abbott [Gina Tognoni].

Right now Hunter King is pulling double duty as Summer on ‘Y&R’ and as Clementine on the CBS dramedy ‘Life In Pieces.’

Traci Abbott [Beth Maitland] pops in and out of Genoa City around the holidays and, it seems, when siblings Jack Abbott [Peter Bergman], Billy Abbott [Jason Thompson] and Ashley Abbott [Eileen Davidson] need Traci to mediate a family feud.

The Young and the Restless fans know that even John Abbott [Jerry Douglas] has been returned from the dead several times as a ghost in order to offer advice to Jack when the Jabot executive needs it most.

A Y&R casting call doe “Dean” was sent out recently and seems a near match for a recast of Adam. ‘The Young and the Restless’ spoilers indicate that if Justin isn’t available to return then it’s time to bring Michael Muhney back as Adam Newman.

Despite the alleged controversy surrounding Michael’s sudden exit, viewers overwhlemingly want the actor to reprise the role of Adam. If not Michael Michael, fans demand that showrunner Mal Young to figure out a way to keep Justin on as Adam, even if it’s only an occasional appearance.

The Young and the Restless spoilers lean toward an Adam recast due to the success of “This is Us.” Is it possible that Y&R could keep Justin happy by putting Adam’s storyline on the back burner and allowing Victor Newman’s [Eric Braeden] son to come back from the grave and show up in Genoa City from time to time?

Justin Hartley is a veteran of primetime dramas – they include roles on ‘Smallville’ [Oliver Queen/Green Arrow], ‘Emily Owens, M.D.’ [Will Collins] and before being cast as Adam the actor appeared in recurring roles in the ABC dramas ‘Revenge’ [Patrick Osbourne] and ‘Mistresses’ [Scott Trosman].

Are the Y&R spoilers correct? Can executive producer Mal Young intermittently bring Justin back as Adam on a recurring basis? Or do you think the role will be recast with Michael Muhney?