The Young and the Restless Spoilers: Lily and Devon Force Neil To Meet With Lucinda – Emotional Showdown With Mom

BY Sean O'Brien on August 29, 2016 | Comments: one comment
Related : Soap Opera, Spoiler, Television, The Young and the Restless 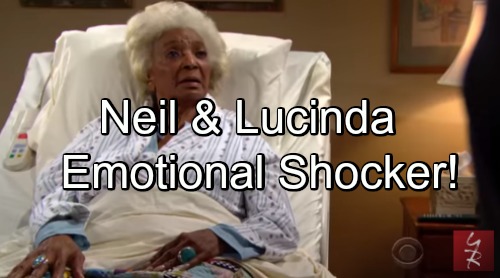 The Young and the Restless (Y&R) spoilers detailed Nichelle Nichols upcoming appearances. She’s set to be seen as Lucinda, who is Neil’s (Kristoff St. John) estranged mother. With an unexpected, and actually honest, assist from Hilary (Mishael Morgan), Lily (Christel Khalil) and Devon (Bryton James) are now prepared to force their dad to meet with his mom.

Neil’s two oldest children want to help their father handle a situation that he obviously hasn’t dealt with to-date. Their goal is to enable open communication with Lucinda, who apparently betrayed Neil’s father decades ago and then left their family. While the results of this intended reunion aren’t possible to estimate, well-intended Y&R fans will be rooting for healing on both sides.

Intentionally coinciding with the historic 11,000th episode of Y&R, Nichols will first appear on September 1, as The Young and the Restless spoilers recently reported. Neil’s previously unknown backstory has been referenced in recent weeks, which establishes the mini-arc that’s about to play out. Nichols is scheduled to appear in two episodes. So, any rapprochement between these characters will have to be rushed.

Lily is naturally interested in the woman who is her paternal grandmother. While Devon came into the Winters’ family years after his sister, this adopted son is equally interested in helping his dad find peace. That’s where the letters Hilary gave to Lily became key.

Hilary kept recent correspondence that Lucinda sent to Neil and to his other family members. Neil later confirmed that he’s been receiving letters from his mother for years, but discarded the unopened items because he didn’t care to explore whatever messages she was sending.

Of course, The Young and the Restless spoilers’ fans know that it’s a bit soapy to believe that Hilary chose to keep mail that was intended for Neil, without having threatened to use that information for past gain. Yet, that’s what she did and the entire Winters’ family should be glad because the potential for resolution now exists.

CDL is a leading source for everything linked to The Young and the Restless. Check back here regularly for Y&R spoilers and news!