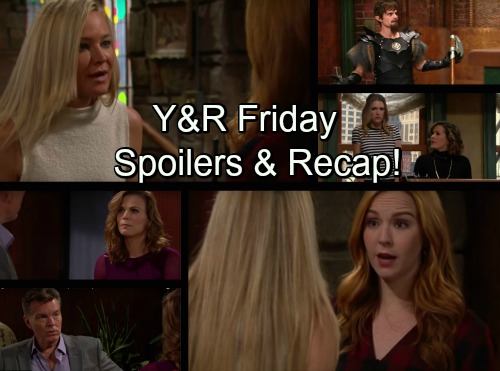 The Young and the Restless (Y&R) spoilers for Friday, October 28, tease that Travis (Michael Roark) will ask Abby (Melissa Ordway) out to lunch, but he’ll have an ulterior motive. They’ll head to Top of the Tower and Travis will order some Champagne. As he pours a couple of glasses, Travis will hint that Abby might have a reason to get revenge on Victor (Eric Braeden).

Travis will suggest that perhaps Abby feels snubbed. She’s a member of the Abbott clan as well and that could affect Victor’s feelings toward her. Abby will realize what Travis is up to. She’ll state that Victor warned her Travis would be digging around. Abby will insist that she’s not the mole and she isn’t out for vengeance.

Stitch (Sean Carrigan) will assume the worst when he spots Abby with Travis. Y&R spoilers say Stitch will force Travis to take a hike. He’ll lash out at Abby for wasting no time. Abby will feel like it’s ridiculous for Stitch to think she’d be on a date. Stitch will decide he owes Abby an apology.

Travis will confront Natalie (Mara McCaffray) about tipping Victor off, but she’ll point out that her loyalty lies with the boss. A phone call will come in for Travis and he’ll head out. Meanwhile, Mariah (Camryn Grimes) will vow to stay on top of the Natalie angle for GC Buzz. She’ll promise to prove her worth to Hilary (Mishael Morgan).

At Jabot, Jack (Peter Bergman) will discuss giving more cash to a Newman board member. He’ll have the briefcase ready, but he’ll be concerned about getting caught with the mole. Phyllis (Gina Tognoni) will offer to make the drop just in case. She’ll go to the bar at the athletic club and wait for the board member.

After they trade briefcases, Phyllis will depart. Nearby, we’ll see that Abby has just witnessed the entire exchange. Across town, Jack will sit on a park bench and take a piece of paper out of his briefcase. He’ll toss it in a garbage can and walk away. 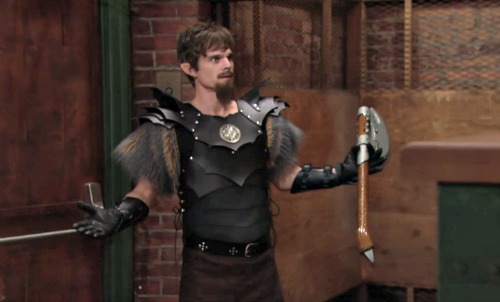 Travis will be spying in the distance. He’ll rush over and dig the paper out of the trash. When Travis sees that it’s blank, he’ll look up to find Jack standing next to him. Jack will ask if Travis is looking for something. It seems Travis will have to try a little harder if he wants hard evidence.

At Sharon’s (Sharon Case) place, Mariah will refuse to help her with the Patty (Stacy Haiduk) dilemma. Everything is just too stressful. Sharon will feel guilty about getting Mariah involved in all of this. Chelsea (Melissa Claire Egan) will arrive later with fears about Nick (Joshua Morrow).

When Chelsea admits that she can’t track Nick down, Sharon will also get worried. Chelsea will indicate that they had plans and she doesn’t want Nick to be alone right now. Halloween is a painful time since it’s the anniversary of Christian’s death. Sharon will be hit with major guilt.

They’ll make some calls and learn that Nick is at The Underground. Chelsea will get confirmation from a staff member as glass breaks in the background. The Young and the Restless spoilers say Chelsea will try to console Nick on Monday. He’ll throw things around the room during a total meltdown.

Elsewhere, Mariah will tell Kevin (Greg Rikaart) that she’s concerned about Natalie. She’ll give him the news that Natalie is Victor’s assistant. When Kevin confronts Natalie, she’ll inform him that she’s fine working at Newman. Natalie will contend that Mariah is just digging up dirt for her gig as a GC Buzz gofer.

Kevin will return to Mariah and rip into her for trying to use him. Chloe (Elizabeth Hendrickson) will think Mariah is trying to make trouble. Unfortunately, this is just a little taste of the backlash that’s coming for Mariah. After the Sully reveal, Mariah will probably be a town pariah right along with Sharon. Stay tuned for updates on the drama ahead.