The Young and the Restless (Y&R) Spoilers: Max Admits Aim To Kill Abby and Baby – Dylan Drags Screaming Child Away

BY Heather Hughes on May 9, 2016 | Comments: 13 comments
Related : Soap Opera, Spoiler, Television, The Young and the Restless 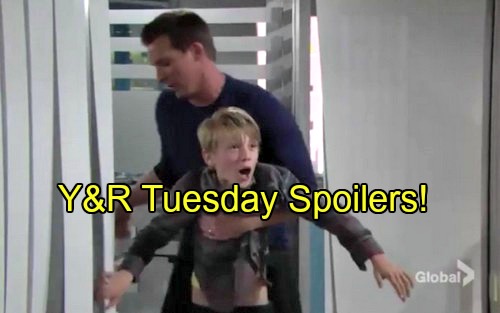 “The Young and the Restless” (Y&R) spoilers for tomorrow’s epsiode, Tuesday, May 10, tease that Phyllis (Gina Tognoni) will fill Jack (Peter Bergman) in on Billy’s (Jason Thompson) night with Fiona. She’ll be outraged that Billy and Fiona slept together.

Jack will be surprised when he hears about Phyllis’ slap. However, Phyllis will just claim that she feels duped by Billy. She’ll believe she’s stupid for thinking Billy was different.

Jack will feel like there may not be much they can do for Billy. He’ll think Billy is clearly on the way to rock bottom. Meanwhile, Victoria (Amelia Heinle) won’t be pleased when she brings the kids by for a visit at Billy’s place. Once Victoria spots Fiona drinking wine with Billy, she’ll shout that she’s turning around and taking the children with her.

The Young and the Restless spoilers say Billy will threaten to call the cops and they’ll continue bickering. Victoria will insist that she’s glad to be free of Billy. Later, Victoria will head back to Hank’s bar for a drink and some support from Travis (Michael Roark).

When Victoria mentions being stuck in Genoa City, Travis will point out that he’s stuck as well. He owns the bar.

Victoria and Travis will make the best of the night by hitting the dance floor. As they move in close, Luca’s (Miles Gaston Villanueva) private investigator will snap a pic in the distance. Travis will kiss Victoria and she’ll announce that she has to go. As she heads off, Victoria’s lips will curl into a hint of a smile.

Fiona will catch up with Jack and Phyllis at the athletic club. Jack will suggest that he can sue Fiona if she puts Brash and Sassy above her commitment to Jabot. Fiona will announce that she’s done with both companies.

Jack will leave to confront Billy and Fiona will turn her attention to Phyllis. She’ll point out that Phyllis’ slap seemed like a jealous move. Fiona will confess that she didn’t take Billy to bed, but she’ll suspect that Phyllis would like to.

At Billy’s place, Jack will arrive to rant about Billy’s latest mistake. Billy will insist that he intends on taking what he wants. It doesn’t matter if it’s Billy’s company, his kids or a woman.

Other “Young and the Restless” spoilers reveal that Stitch (Sean Carrigan) will push Max (Jared Breeze) to tell him why he caused Abby’s (Melissa Ordway) accident. Max will admit that he wanted rid of Abby and her baby. As Stitch gets emotional, Max will say he wanted his dad back.

Nearby, Ashley (Eileen Davidson) and Dr. Neville (Michael E. Knight) will pass along some news to Dylan (Steven Burton). He’ll hear that Max made a confession. Dylan will give them updates on the proof tying Max to the fire. Dr. Neville will tell Dylan that Max has real problems.

He needs to make sure Max gets the professional help he needs.

Dylan will head in the office and declare that social services is headed over. He’ll tell Stitch that Max will have to come alone. Stitch will encourage him make an exception, but Dylan won’t allow it. This is the way it has to be. Max will be dragged out screaming as everyone watches in tears.

Dylan will return later and make an effort to be supportive. Abby will try to be there for her husband, too. Stitch won’t be willing to listen to either one of them. Abby will talk to Ashley about her fears. She’ll think Stitch blames her for all of this.

Y&R viewers will be anxious to see how long this marriage can survive. Stick with the CBS soap to see what’s next for this couple.