BY Heather Hughes on May 19, 2016 | Comments: one comment
Related : Soap Opera, Spoiler, Television, The Young and the Restless 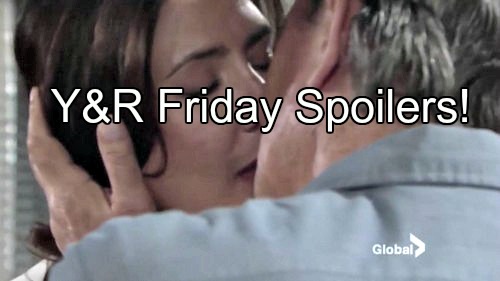 “The Young and the Restless” spoilers for tomorrow’s episode, Friday, May 20, tease that we’ll see things heat up at the state pen. Dr. Meredith Gates (Alicia Coppola) will bandage Victor’s (Eric Braeden) wound as he gripes about Adam (Justin Hartley). Meredith will once again push Victor to forgive his family.

She’ll give him a loving look as she touches his hand, but she’ll quickly back off.

Meredith will tell Victor that he isn’t alone and he’ll grasp her face gently. Victor will kiss Meredith and she’ll send him away. However, it seems Meredith just won’t be able to get Victor out of her head. She’ll call him back to the infirmary to say so.

Victor will hint that the real prison for him is not being able to have Meredith. This time Meredith will make a move. They’ll start making out. How scandalous! Victor’s plan is probably working out even better than he expected.

Meanwhile, Billy (Jason Thompson) will be distracted as he talks to Ashley (Eileen Davidson). She’ll pick up on the fact that he might have a new woman in his life. Billy will deny it, but Ashley will think her suspicions are correct. A little later, Ashley will inform Jack (Peter Bergman) that Billy must be involved with someone who means a lot to him. 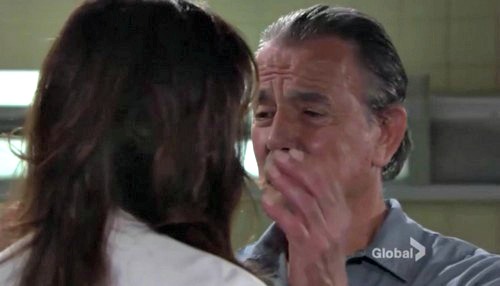 Billy will recall memories of being with Phyllis (Gina Tognoni) before heading off on his motorcycle. He’ll run into Phyllis at the park and insist that he can’t stand it anymore. Billy just wants to be with her. Phyllis will suggest that their romance would bring the destruction of the Abbotts. Billy will state that this is real as he pulls Phyllis close for a kiss.

At the athletic club, Neil (Kristoff St. John) will have an issue with whatever Hilary (Mishael Morgan) has in store for Jack. Hilary will point out that Neil can’t stop her unless he wants to go to jail. Neil will head off to Hank’s bar to drown his sorrows. Cane (Daniel Goddard) will find Neil and try to stop him.

He’ll believe Lily (Christel Khalil) could turn on Neil if he continues down this path. Neil won’t seem to care as he downs shots.

Other “Young and the Restless” spoilers say Lily will have a heated discussion with Hilary at the club. Lily will indicate that Jack can be charmed, but she can’t. Hilary will make some veiled threats, but Lily will warn that she can take her down. She’ll suggest she could give Devon (Bryton James) the news that Hilary is making plays for Jack.

At the park, Abby (Melissa Ordway) and Stitch (Sean Carrigan) will try to enjoy themselves. They’ll finally get out of their funk. Later, Ashley will urge Stitch to let Abby be there for him. Giving Stitch support will help Abby feel secure. Stitch will make plans for some romance in a suite. He’ll declare that he wants a new beginning with Abby.

Can Stitch and Abby really leave the past behind them? Time will tell, but Y&R buzz hints that starting fresh may prove tougher than they thought. Stick with the CBS soap for updates on the potential trouble ahead.