BY Stormy Elizabeth on May 19, 2016 | Comments: 6 comments
Related : Soap Opera, Spoiler, Television, The Young and the Restless 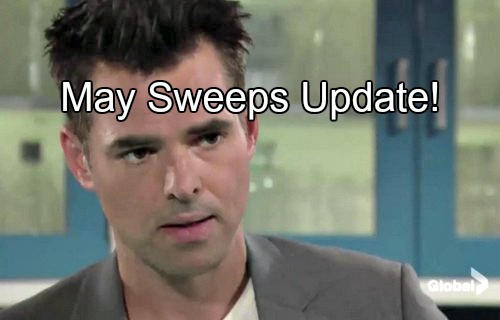 “The Young and the Restless” (Y&R) spoilers for May sweeps indicate more action to come centered on secrets many in Genoa City are keeping – Adam, Sage, Billy, Phyllis, Travis, Hilary and more. As sweeps moves on, Victor Newman (Eric Braeden) continues to scheme from behind bars to exact revenge.

The jailbird is busy undermining Victoria Newman (Amelia Heinle) both with her brothers and the board members. Not only that, but Y&R spoilers say we’ll see Victor continue to creep closer to his goal of getting out of jail. Judge Gates said no way would that happen, but that adjudicator is dirty.

Does anyone else remember that Gates took a payout to prevent Devon Hamilton (Bryton James) from being extradited? Judge Gates was for sale before and should be again. Plus, Dr Meredith Gates (Alicia Coppola) is working out her daddy issues with Victor.

If Victor keeps sweet talking the prison doc (that little smooch was a big moment) and her dirty judge daddy thinks he has a shot to have Victor as a billionaire son-in-law, there’s no telling what the judge might do for Victor. The Young and the Restless spoilers ask if Nikki Newman (Melody Scott) can expect divorce papers soon?

Luca Santori (Miles G Villanueva) has his own profound daddy issues and is working those out by encouraging Summer Newman (Hunter King) to act like a mini-Mustache and make trouble at Newman Enterprises. Will Victor approve of their disruptive actions?

And can Victoria’s new fling with Travis (Michael Roark) cushion the blow of all the drama at work? Victoria will pull back from Travis then fall back in bed with him while Travis falls hard for her. But when her real identity is revealed, there will be an explosion but Travis is also keeping secrets…

Billy Abbott (Jason Thompson) and Phyllis Newman (Gina Tognoni) have done the deed but now Phyllis wants to forget about it. Billy first agrees to drop the issue but then wants more of his sister-in-law. He’s jealous because Phyllis ran back to his big brother Jack Abbott (Peter Bergman).

Billy’s jealous now, but Phyllis may be jealous later. A new lady in town, Bethany Bryant (Chrishell Stause), will soon catch Billy’s eye and has Phyllis seeing green. But will Phyllis be doubly threatened when someone moves in on Jack as well? It’s clear that Hilary Curtis (Mishael Morgan) has set her sights on Jack.

Whether Hilary wants to partner up for a power play or is thinking of an altogether more intimate partnership remains to be seen. But since Devon is pushing back on her and seems to be less inclined to tolerate her thirstiness, Jack may be the new man she has in mind.

New casting spoilers reveal that CBS Daytime is looking for a Kelly Sullivan look-alike to do some stand-in scenes as Sage. Have the showrunners changed the storyline based on Sage death backlash from fans that require additional scenes? Shooting with pseudo-Sage is slated for later this week.

Lots more going on this month – let’s hope Sage’s death early on wasn’t the big surprise of May sweeps. We’ve got fingers crossed for the “Christian is alive” reveal and Victor strutting out of jail with Dr Gates on his arm will all happen before sweeps subsides.