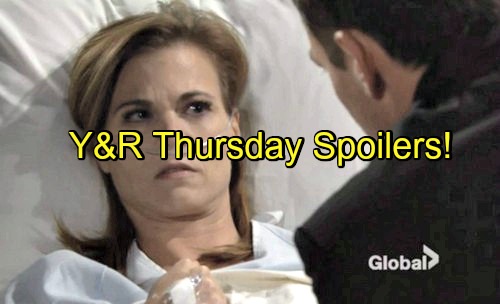 The Young and the Restless (Y&R) spoilers for Thursday, September 22, tease that a reporter will hurl some shocking accusations at Jack (Peter Bergman). This scandal has naturally led to a lot of talk about Jack and Phyllis’ (Gina Tognoni) relationship. Phyllis may be the cheater, but that hasn’t stopped people from wondering about what drove her to betray her husband.

Things were obviously on shaky ground before Phyllis and Billy’s (Jason Thompson) affair. The public wants to know what the issues were and that’s lead to some nasty speculation. The reporter will wonder if Jack’s heard what people are buzzing about. Word on the street is that Jack beat up his wife.

The Young and the Restless spoilers reveal that Jack will be stunned by the abuse gossip. He’ll undoubtedly defend his innocence and suggest that it’s no one else’s business anyway. This news will may make Jack even more determined to get revenge on the key players in this mess. They’ve all played a role in dragging Jack’s good name through the mud.

Of course, Jack’s not too concerned about trying to regain respect within the community – at least not the same kind as before. Instead, Jack wants to be a man who’s revered for his nerve and feared for his tactics. It sounds like Jack is hoping to venture into Victor’s (Eric Braeden) territory.

Elsewhere, Victoria (Amelia Heinle) will try to make Jill (Jess Walton) understand her point of view. She’ll want Jill to get it through her “insanely thick skull” that she’s never getting back together with Billy. Jill will sip her coffee as she plots her next move. It’s doubtful that Jill will ever believe Billy and Victoria have truly run out of chances.

We’re not buying that they’re completely over either. By throwing around words like “never,” Victoria is pretty much guaranteeing that a reunion is in the works. That’s just the way it goes on Y&R. It may take a while to get there, but Victoria and Billy may give their relationship another shot at some point.

Until then, Billy will do everything in his power to win Phyllis over. He probably has some lingering feelings for Victoria, but Phyllis is the one he really wants at the moment. The Young and the Restless spoilers say Billy will beg Phyllis to look in her heart and find the truth. He’ll urge Phyllis to accept that she loves him and realize they can still be together.

To make this scene even more interesting, it’ll go down in the emergency room. Phyllis will have to be hospitalized for some reason. There aren’t any visible marks on her in the preview clip, so maybe Phyllis will have a panic attack or collapse from stress. Whatever the case, Billy will be right by Phyllis’ side.

It’s clear that Billy cares about Phyllis, but she seems determined to repair her marriage. Will Billy be forced to move on? We’ll give you updates as other details emerge. Stay tuned to Y&R and don’t forget to check CDL often for the latest Young and the Restless spoilers, updates and news.

Ashley is not holding back when it comes to her cheating sis-in-law! YOU’RE NOT INTERESTING. YOU’RE NOT SPECIAL. @eileen_davidson #YR pic.twitter.com/6rlXNSRr5f