The Young and the Restless Spoilers: Phyllis Relents and Joins The Moustache to Bury Luca, Save Summer – Team Villis Forms 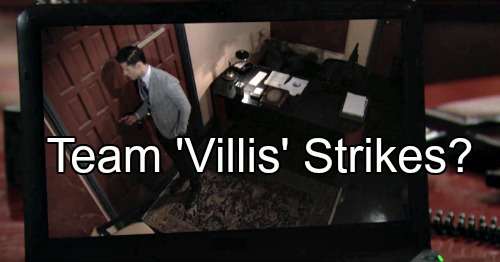 The Young and the Restless (Y&R) spoilers have documented many romantic power couples in the past. But, in this instance an unexpected platonic pair appears to be forming. Faced with the perceived, or real, threat known as Luca Santori (Miles Gaston Villanueva), Victor’s (Eric Braeden) offer to team with Phyllis (Gina Tognoni) isn’t as “crazy” as she stated to Jack (Peter Bergman) this week. ‘Villis’ has the potential to stop ‘Suca’ cold.

Enemies can work against a common opponent if they are so motivated. The Moustache didn’t want the Santori family’s fingers to remain in Newman Enterprises. So, he eventually found a way to remove them. But, the once prodigal son, Luca, stuck around in Genoa City, which transformed him into more than an annoyance.

His subsequent claim that he grew to love Summer seems plausible to viewers. But, Victor and Phyllis aren’t buying what they think is a smoothly delivered lie, even though Luca currently thinks they have.

The Young and the Restless spoilers show us that Summer (Hunter King) is slowly developing street smarts, but has a long way to go before she could be considered sharp. Her willingness to almost instantly accept Luca’s acknowledgment of his initial corporate quest caused Y&R viewers to shake their heads once again. However, agreeing to marry this man creates complications for those who genuinely love Summer.

The Young and the Restless spoilers previously revealed that Phyllis and Victor are playing coy with Summer. They don’t want to upset her, or enable her to tip off Luca regarding their true feelings about the engagement. This mutually held distrust allows the possibility of a targeted ‘Villis’ team to form and then fight hard.

Phyllis can’t be blamed for detesting the sight of Victor Newman. The Moustache placed her life in jeopardy by inserting Marco Anaselli (also Peter Bergman) into her life. However, like many parents, she’s also capable of doing anything to protect her child. So, Phyllis just might comply with Victor’s request to attack a common enemy with two barrels, even if one of them is colored ‘Red’.

Are you excited to see Team Villis form, some Y&R fans would call a teaming of Victor and Phyllis Team ‘Vilest!’ – can The Moustache and Phyllis get along well enough to achieve their common goal?CDL is a leading source for everything linked to The Young and the Restless. Check back regularly for Y&R spoilers and news!