The Young and the Restless (Y&R) Spoilers: Sage Gives Up On Adoption, Urges Shawn to Keep Baby – Christian Reveal Looms 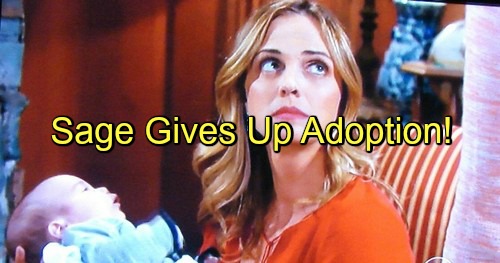 “The Young and the Restless” (Y&R) spoilers tease that Sage (Kelly Sullivan) will find herself facing a tough choice on next week’s episodes. We don’t know for sure what this decision involves, but it’s probably about the adoption. Sage has done everything she could to convince Shawn (Devon Martinez) to hand over the baby she’s been longing for.

Nick (Joshua Morrow) tried to warn Sage about getting her hopes up, but she just couldn’t help it. Sage desperately wants to be a mother, but Shawn seems to be leaning toward keeping her son. Shawn was already having major doubts and now that David is here, they’re nearly inseparable.

The Young and the Restless spoilers tease Sage will suggest an open adoption so that Shawn can still have a relationship with her child. However, Sage may start to realize that she’s fighting a losing battle. If Shawn stays in David’s life, she’ll inevitably bond with him. It’s difficult to believe that Shawn wouldn’t back out of the adoption before her year is up.

As a result, Sage might decide to give Shawn her blessing. We know that Shawn can do whatever she wants anyway, but she’s obviously worried about disappointing Nick and Sage. If Sage tells Shawn it’s OK to keep David, Y&R spoilers suggest it could be the final push Shawn needs to accept motherhood.

Of course, that would leave Sage back at square one. She’d be depressed and childless once again. Luckily, “The Young and the Restless” spoilers say there’s a light at the end of this tunnel. Good news is coming up soon.

After the truth is revealed, Christian will likely be returned to Sage. Her depression will undoubtedly transfer to Sharon and Dylan. We’ll also have the paternity bombshell at some point. Nick will certainly be bummed when discovers Christian actually belongs to Adam (Justin Hartley).

It sounds like a lot of drama is on the way. That’s exactly what Y&R viewers are hoping for. You won’t want to miss the intense scenes to come. Stick with the CBS soap for updates on all the shocking revelations.