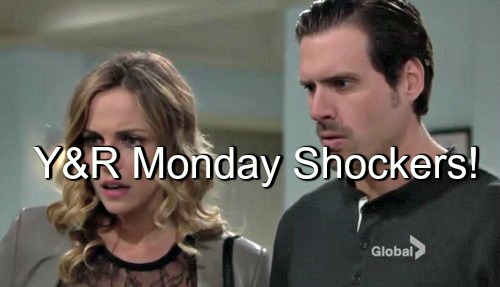 “The Young and the Restless” spoilers  (Y&R) for nest week’s episode on Monday, April 4, tease that Victor (Eric Braeden) will see a familiar face in prison. Ian (Ray Wise) will grin from ear to ear as he offers his services to Victor. He’ll insist that Victor needs his protection. Victor will balk at the idea. He’ll tell Ian that he doesn’t need his help.

Later, Ian will intervene when a burly inmate tries to bother Victor during his chores. Ian will declare that he’s going to protect Victor whether he likes it or not. Once Victor returns to his cell, he’ll drift off to sleep and dream of Victoria (Amelia Heinle) begging for forgiveness.

Victor will wake up to find a thug attacking him in an attempted prison murder. He’ll fall out of bed and whimper. It looks like Victor needs Ian’s assistance after all.

Meanwhile, Shawn (Devon Martinez) will become quite attached to her child. She won’t want the nurse to take him away. Nick (Joshua Morrow) will assure Shawn that everything will be OK. Sage (Kelly Sullivan) will realize that she can’t completely take away Shawn’s baby.

She’ll suggest an open adoption would allow Shawn to stay connected to David.

Shawn will like the idea, but it may not be enough. After Shawn opens up during a chat, Nick will inform Sage that Shawn might be changing her mind. Sage will fear that they’re quickly losing their second chance baby.

Nearby, Dylan (Steve Burton) will talk to the nurse who helped Dr. Anderson (Elizabeth Bogush). He’ll ask what she was doing at Fairview around the time of Sully’s birth.

The Young and the Restless spoilers warn that the nurse will claim that she was summoned to examine the baby. Dylan will press the nurse for answers about Dr. Anderson. He’ll wonder if the doc ever mentioned Nick Newman. The nurse will indicate that she’s sensing Dylan has some sort of personal connection to this case.

Dylan will check into the nurse’s record and discover that she’s never had any problems. Sharon (Sharon Case) won’t think that necessarily means anything. Just look at what happened with Dr. Anderson. She’ll feel like they can’t know what this nurse might be hiding.

At the office, Victoria will talk to Michael (Christian LeBlanc) about coming to Newman as a consultant. There’s half a million dollars in it for him. Michael won’t be interested. Victoria will want to sue Jabot, but Michael will urge Victoria to work it out with Billy (Jason Thompson) instead.

Elsewhere, Phyllis (Gina Tognoni) will tell Jack (Peter Bergman) that he means more to her than revenge. Jack will be relieved to hear that Phyllis is dropping her grudge. He’ll hope Billy can patch things up with Victoria as well.

Other “Young and the Restless” spoilers reveal that Victoria will decide to offer Billy a compromise. She’ll suggest they should split the profits of Passkey. Unfortunately, Billy’s drunkenness will put the brakes on the negotiations.

When Billy steals a kiss, Victoria will promptly call the whole thing off. She’ll state that she’ll see Billy in court.

It sounds like some major storylines are about to shift. Mysteries are unraveling and fierce battles are looming. Y&R viewers will be anxious to see what’s in store. We could see some bad news emerge for several Genoa City residents. Stick with the CBS soap for updates on the chaos ahead.