The Young and the Restless Spoilers: Phyllis Tells Jack They’re Getting Married, Mariah Buddies Up To Sharon, Stitch To The Rescue 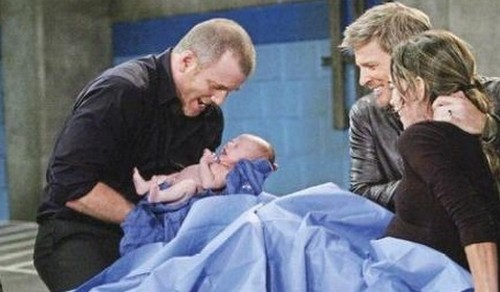 The Young and the Restless spoilers tease that Phyllis Newman will make an interesting move on the Wednesday November 12 episode of the CBS soap. Phyllis (Gina Tognoni) has recently found Kelly’s picture in Jack’s desk and “I love you” texts on Jack’s phone from Kelly, she is not a fool, it’s obvious that Jack (Peter Bergman) is involved with Kelly. So, instead of confronting Jack about his relationship with Kelly or for that matter her relationship Jack, Y&R spoilers tease that on Wednesday’s episode Phyllis shows Jack her engagement ring and announces they are getting married ASAP, and she is going to have Kelly plan the wedding.

In other The Young and the Restless news, CDL’s exclusive spoiler source reports that Sharon Newman finds an unlikely supporter. Apparently there is one person left in Genoa City who doesn’t think Sharon is the spawn of Satan – her daughter Mariah. Y&R spoilers tease that after Mariah bickers with Summer (Hunter King) over whether Sharon should be held accountable for her actions, she pays her mom a visit and lets her know what she supports her and understands she was ill and not on her medication when she switched Summer’s DNA test results.

The Young and the Restless spoilers also tease that on Wednesday’s episode of the CBS soap Avery (Jessica Collins) goes up one side of Joe Clark (Scott Elrod) and down the other, and lectures him for kissing her and informs him she is going to court to stop him from buying Dylan’s coffee shop. Meanwhile, Stitch (Sean Carrigan) receives a frantic call from Maureen who appears to be having a heart attack in a parking ramp. Unbeknownst to him, Maureen (Meredith Baxter) just locked Victoria in a janitor’s closet and she is going in to labor. Y&R spoilers tease that Stitch rushes to his mother’s rescue and has no idea that Victoria is trapped just a few feet away.

So Y&R fans, do you think someone will find Victoria before she has the baby? Can you believe that Jack still hasn’t manned up and told Phyllis about Kelly? Is he really going to marry her? And, what about Mariah’s newfound compassion for Sharon, is she sincere or is she up to something? Let us know what you think in the comments below and don’t forget to check CDL tomorrow for more The Young and the Restless spoilers and news.