‘The Young and the Restless’ Spoilers: Is Austin Alive and Working For Evil Ian Ward – Joe Clark His Dad? 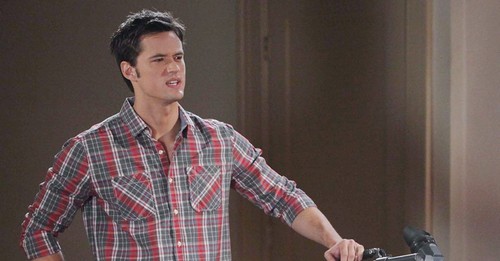 “The Young and the Restless” spoilers reveal that we haven’t seen the last of Austin’s (Matthew Atkinson) antics. He recently took a bad blow to the head at the cabin and was thought to be dead. Unfortunately, that pesky punch had everyone out like a light and they were all left wondering exactly what happened. Though she doesn’t know for sure, Summer’s (Hunter King) convinced she’s the one who took him out. However, when the crew tried to make it look like an accident, Austin’s body mysteriously vanished. So what’s next for the shady twenty-something?

“The Young and the Restless” spoilers tease that he’ll be back and he may be in cahoots with the villainous Ian Ward (Ray Wise). In fact, the latest rumors hint that he only married Summer because Ian instructed him to. Y&R fans know that Austin has a dark past and he’s proven he’s capable of stooping to Ian’s level. Austin may have been hired to help Ian get back at Victor (Eric Braeden) for having him thrown in jail. Telling Austin to have an affair with Victor’s daughter, Abby (Melissa Ordway), is certainly one way to stir things up. Perhaps all the trouble Austin has caused is simply a result of him following Ian’s orders. Stay tuned to “The Young and the Restless” to learn if Austin has been doing Ian Ward’s dirty work.

Other “Young and the Restless” spoilers indicate that Ian will come back to find Victor’s family in turmoil in the near future. YR viewers will learn that the redevelopment deal Joe Clark (Scott Elrod) was working on was supported by Ian. Things are sure to get dicey as Nikki (Melody Thomas Scott) goes up against Victor over her son Dylan’s ownership of the coffeehouse. It seems the stress will have Nikki reaching straight for more vodka. Keep watching “The Young and the Restless” to see it all unfold as Ian returns to Genoa City.

So Y&R fans, what do you think about Austin’s connection to Ian? Could Austin be Ian’s son or does he possibly belong to Joe Clark? Since Austin’s body has disappeared, does that mean he’ll show back up to cause more trouble? What about all the tension between Victor and Nikki? Will it send Nikki over the edge? Let us know what you think in the comments below and don’t forget to check CDL tomorrow for the latest “Young and the Restless” spoilers and news.