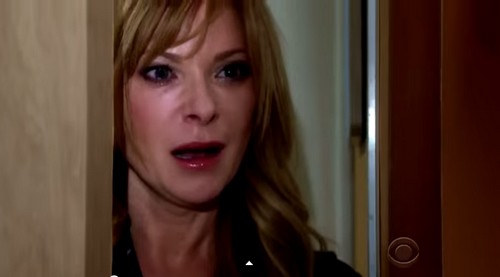 “The Young and the Restless” spoilers tease that the episode of the CBS soap airing on Monday February 23 will be another exciting one full of can’t miss drama for Y&R fans. “Disaster Week” may technically be over, but the aftershocks of all of the tragedies in Genoa City continue to rock the lives of some of our favorite character on Monday February 23. Rumor has it Y&R fans will not want to miss a single second!
“The Young and the Restless” spoilers recently revealed on the CBS soap that Austin’s supposedly dead body has gone missing.

According to spoilers on February 23 the police will arrive at the Abbott Cabin and search for Austin – who his friends report missing, they neglect to tell the police that when Austin went missing, he was already technically dead. Summer (Hunter King), Courtney, Mariah (Camryn Grimes) and the rest of the group head to the police station where Paul proceeds to take their statements, and Summer Newman begins to unravel. At this stage in the game, they better hope that Austin (Matthew Atkinson) does turn up alive – because before Summer is through she is going to have them all arrested.

Y&R spoilers tease that on Febraury 23 Genoa City residents will continue to stand by at Crimson Lights, in hopes that Jack Abbott and Victor Newman (Eric Braeden) will be pulled out of the rubble – but it does not look promising. While Nikki Newman proceeds to have a breakdown over her husband, Phyllis and Kelly both wait impatiently to learn Jack’s fate. According to “The Young and the Restless” spoilers, Kelly (Cady McClain) uses the opportunity to fill Phyllis (Gina Tognoni) in on her and Jack having sex in the closet, and in return Phyllis attacks her and slaps her. Y&R spoilers tease that a body is finally recovered from the Underground, and pronounced dead at the scene, there is no news yet on whether it is Jack, Victor, or someone else.

“The Young and the Restless” spoilers also tease that Neil Winter’s (Kristoff St. John) family continues to unravel at the site of their plane crash. Neil wanders off in search of help, and nearly dies of hypothermia – but is found by a rescue worker minutes before he slips out of consciousness. Meanwhile, back at the plane crash Hilary’s health continues to deteriorate. Lily lashed out at Devon (Bryton James) and Cane, and announces that she will never forgive her husband nor trust him again because he kept Hilary and Devon’s dirty little secret.

So Y&R fans, what do you think happened at the Abbott Cabin, is Austin alive? Will Jack or Victor die at the Underground? Who do you think they find dead in the rubble? Is Hilary paralyzed? Will Lily eventually forgive Cane or could this be the end of their relationship? Let us know what you think in the comments below and don’t forget to check CDL tomorrow for more “The Young and the Restless” spoilers and news.