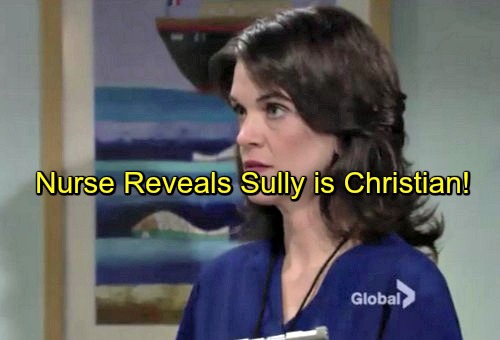 “The Young and the Restless” spoilers (Y&R) tease that next week’s episodes hold a shocking and terrible secret for a desperate Genoa City couple. Sharon (Sharon Case) will try to remember what happened the night Sully was born.

Sharon was completely out of it thanks to Dr. Anderson’s (Elizabeth Bogush) drugs, but she’ll have a few flashes that could point her in the right direction.

Something just seems off about the birth story to Dylan (Steve Burton) and he’s determined to get some answers.

Y&R spoilers say Dylan will question Sharon about what she recalls. He’ll feel like it’s important to put all the puzzle pieces together. Sharon will confess that she can’t remember much, but she’ll have a fuzzy memory of a nurse standing in the corner of the room.

Dylan will think that could be a great start and they’ll set out to crack the case.

The Young and the Restless spoilers herald that Sharon and Dylan will attempt to track down this mysterious nurse. It sounds like this person was one of Dr. Anderson’s minions. That probably means Dylan and Sharon won’t get the details they’re hoping for.

Still, even a lack of info could put them on a path to stunning revelations. If this nurse doesn’t cooperate, they’ll realize they need to dig deeper.

Dylan will follow the trail as far as he can. There’s a good chance Patty (Stacy Haiduk) will be the one who truly sheds light on Dr. Anderson’s actions. The shady doc’s evil deeds turned out pretty well for Dylan and Sharon, but they had tragic results for Nick (Joshua Morrow) and Sage (Kelly Sullivan).

Once the baby theft is revealed, we’ll likely see a twist of fate for these couples.

It should be interesting to see how Dylan will react to the news that Sully is actually Christian. If Dylan finds out on his own, could he try to hide the truth? Since “The Young and the Restless” tends to portray Dylan as honorable and heroic, he may do the right thing immediately.

However, Dylan’s love for his baby boy is strong. That could mess with his thinking.

Dylan might be desperate to keep Sully and preserve Sharon’s sanity. After all, we don’t know what Sharon could do when she gets updates on all of this. Nevertheless, Dylan may make the painful decision to expose Dr. Anderson’s lies and hand over Christian to his rightful parents.

In that case, Sharon may never forgive Dylan for letting his curiosity get the best of him. Tough times are definitely ahead for this pairing. Stick with the CBS soap to watch this baby bomb drop.