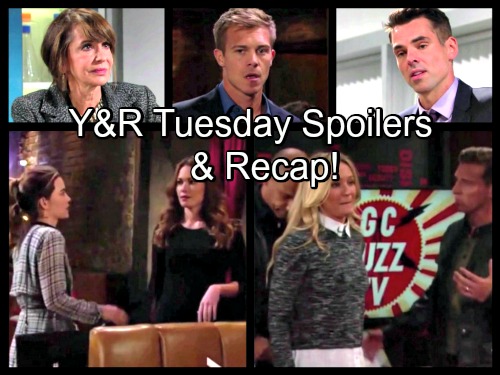 The Young and Restless (Y&R) spoilers for Tuesday, November 15, tease that Sharon’s (Sharon Case) GC Buzz interview will come with major consequences. The whole town will be buzzing about the scoop Hilary (Mishael Morgan) is getting. Sharon will explain that she hid the truth to protect her family. She’ll bring up everything that happened with Dr. Anderson (Elizabeth Bogush) and Patty (Stacy Haiduk).

Nick (Joshua Morrow) will be outraged when he learns that Sharon is defending her behavior. Nikki (Melody Thomas Scott) won’t be pleased by Sharon’s efforts to spin this either. She’ll wonder when Sharon’s arrest is coming. At the police station, Paul (Doug Davidson) will realize he has to take action.

Dylan (Steve Burton) will rush over to GC Buzz after hearing Mariah’s (Camryn Grimes) voicemail. He’ll put a stop to the interview and ask what Sharon thinks she’s doing. While they argue, Hilary will quiz Mariah. She’ll try to figure out how long Mariah has known Sharon’s secret.

Later, The Young and the Restless spoilers reveal that the cops will burst in. As Sharon is led away in handcuffs, Hilary will capture the heartbreak on camera. Sharon will be taken to the station to face Paul’s questions. She’ll sob as she admits everything in a recorded statement.

Dylan will tell Christine (Laralee Bell) that Sharon was aware of what she was doing. It wasn’t malicious, but Sharon was stable. Christine will think it’s time to file kidnapping charges. At Victoria’s (Amelia Heinle) place, she’ll make up with Travis (Michael Roark). They’ll put their fight behind them and share some steamy moments.

At The Underground, Y&R spoilers say Victoria and Travis will enjoy the rest of the night. Nick and Chelsea (Melissa Claire Egan) will come in to escape the media frenzy. They’ll decide to close and wait for the press to retreat. Victoria will mention Katie’s (Sienna Mercuri) upcoming birthday party. She’ll suggest that they should add Christian’s belated birthday to the celebration.

Suddenly, Michelle (Kelly Frye) will show up. Travis will look anxious as Victoria gets rid of her. Once Michelle heads out, Victoria will note that something seems to be bothering Travis. He’ll claim he’s just ready to go home.

They’ll head back to the house and Travis will shoot Michelle a text. At Brash and Sassy, Billy (Jason Thompson) will tell Jill (Jess Walton) that he wants happiness for Victoria. He’ll believe Travis might be the one to give it to her.

At the athletic club, Billy will take a seat next to Michelle at the bar. She’ll walk away for a minute and Billy will catch a glimpse of her phone. He’ll observe that Travis sent a suspicious message about keeping something from Victoria. The Young and the Restless spoilers hint that Billy will fear he misjudged Victoria’s beau.

Nearby, Victor (Eric Braeden) and Nikki will run into Hilary and Devon (Bryton James). Hilary will defend the reporting they did earlier. Victor will want to make sure they keep this story focused on Sharon’s mistakes. He’ll warn that Devon and Hilary had better not cross any lines.

It looks like things are getting messy on the CBS soap. We’ll give you updates as more news comes in. Stay tuned to Y&R and don’t forget to check CDL often for the latest Young and the Restless spoilers, updates and news.

#YR Fans are in for a real treat! Here’s a link to watch the script reading of Episode 1 @paleycenter! #YR #1for30 https://t.co/fAPRNlDpUk pic.twitter.com/KIDgcF4xp5

TOMORROW ON #YR: Sharon is in hot water! https://t.co/UeapSuQLk2 pic.twitter.com/vNJBEmTKC5

Catch up on all 19 webisodes from our “Not Safe For Daytime” series! Which one gave you the most feels? #NSFD https://t.co/812WAm3oTT pic.twitter.com/6vE1lHQe12